BRI studies air quality in Bakersfield along side The Aerospace Corporation

Bakersfield, California, September 14, 2018 – Despite setbacks faced by BRI on the morning of departure the study platform TMOG Surveyor still collected data on air quality in collaboration with the Aerospace Corporations hyperspectral imager Mako and the midwave-infrared sensor MAHI.

It was Friday morning at the Bubbleology Research International (BRI) lab; staff members vigorously prepared AMOG (Automobile Trace Gas) Surveyor to partake in an important expedition to study air quality in Bakersfield, California.  AMOG was scheduled to collect data in collaboration with the Aerospace Corporations hyperspectral imager Mako and the midwave-infrared sensor MAHI. “The campaign continued our investigation of the century-old Bakersfield oil extraction complex, which we have been studying now for several years to assess temporal trends in methane emission from this venerable production field”, said Dr. David Tratt, the lead Aerospace Corporation, scientist for this study.

For BRI the preparation for this experiment had been going on for weeks, but the last week was intense, with all the staff doing their part to get AMOG ready. “We wanted to give the system a real field test including all the different analyzers and the ceilometer; Bakersfield provided an excellent, complicated source. We wanted to look into whether or not combining the ceilometer vertical data with our in situ measurements would do a better job at estimating flux and we had the opportunity to compare with airborne remote sensing as a reference”, said Dr. Ira Leifer chief scientist and CEO of BRI. Unfortunately, as BRI staff prepared AMOG to depart that morning a problem with the car’s alternator was discovered. Despite the hindrance, BRI had an alternative plan. AMOG still functions while using generators. Thus instead of driving AMOG to Bakersfield, we would tow it there on a car trailer. Once AMOG arrived in Bakersfield, it would be taken off the trailer and driven while functioning off the generator alone.  This plan seemed promising; however, then we discovered the generator was not wired up to start! The fast-approaching deadline ultimately led to the decision to abandon using AMOG altogether.

AMOG Surveyor pictured on the day it was supposed to depart for Bakersfield.

With AMOG out of service, BRI would have to execute a much more difficult plan and time was very short.  The data collection would be carried out by TMOG Surveyor; the BRI development in progress that up until then had not been used in the field.  Assembling TMOG was no easy feat; however BRI was determined to collect data. A lot of work needed to be done to get TMOG ready, but BRI was up to the challenge.  Assembly involved installing analyzers, setting up communications, setting up power, fabricating the mount for the wind anemometer, and getting the real time computer code adapted to the TMOG configuration of sensors and analyzers.  Also, because there was not a proper mount for TMOG’s wind sensor, a base had to be set up in the bed of TMOG. The ceilometer, which measures aerosol profile, had been installed in TMOG and was working from the day before and included a GPS timeserver.  However, the GPS timer doesn’t provide high-quality GPS position so in addition to everything else a GPS had to be installed. GPS installation was accomplished by mobilizing BRI’s video boombox, which was created for marine remote sensing application. The boombox, handled some of the communications, and “talked” to the sonic anemometer and the GPS.  However, once everything was hooked up to TMOG’s one-kilowatt inverter installed in the cab, it blew a circuit. So a new higher power inverter had to be wired up. BRI astonishingly completed this entire process in about three hours. 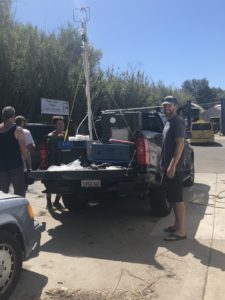 Most happily, Mako and TMOG were both late an hour and arrived in Bakersfield almost simultaneously.  Despite all of the setbacks BRI faced that morning we persevered and were able to collect data. “I was hopeful that we could get something working and still get out there. I didn’t think we’d get as many instruments working in time as we did and that things would work so smoothly”, Leifer said. Also data were collected continuously throughout the drive to Bakersfield and on the way back.  TMOG measured ozone, methane, carbon dioxide, water vapor, winds, GPS, and aerosol profiles. Mako And MAHI also measured a varity of emissions “Mako’s sensitivity to alkanes is such that we have only observed methane in our previous flight series. The latest campaign entailed coordinated flights of Mako and a midwave-infrared sensor (MAHI). MAHI is significantly more sensitive to non-methane alkanes than Mako, so that it may be possible to observe instances of methane/ethane co-emission. The partition ratio between these two gases is frequently used to determine the origination of natural gas reservoirs”, said Dr. Tratt.
Since TMOG did not have a proper mount for its wind sensor it couldn’t be assumed that winds were good, so TMOG stopped periodically to ensure good winds.  The concern was with the truck’s bow wave; the truck body affects the wind flow and if the anemometer is not high enough, it doesn’t represent the real winds; it was important to get out of the flow stream (see diagram). 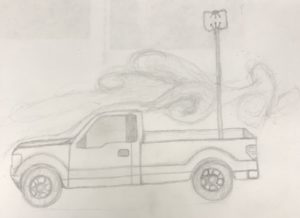 Airflow around a pickup truck with the anemometer
out of the flow stream.

When TMOG arrived, winds were not ideal for data collection; because they were not approaching from a favorable direction, they were mostly from the west.  Eventually, the atmosphere started to change dramatically with much higher methane levels everywhere. In total, the drive took about 7 hours at an average speed of 50 mph, so roughly about 350 to 400 miles of data were collected in a long afternoon and evening.

Findings were interesting.  “One of the reasons we chose Bakersfield is because according to the California air resources board it has some of the worst air quality in the nation; It didn’t disappoint” Leifer said. As TMOG descended from the LA forest at altitudes of 5,000-6,000 feet into the San Joaquin Valley, the air quality got progressively worse, and the dirty air was from the surface to about 3,000 feet.  Lots of sources were found on Round Mountain, where TMOG also climbed above the planetary boundary layer. Also, different plumes had different ethane to methane ratios, even where the sources were very close to each other. 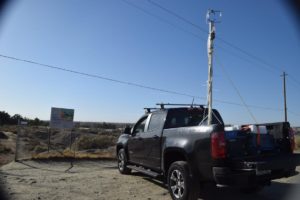