In southern California, and elsewhere, oiled birds are periodically found on beaches with no obvious associated oil spill. Possible sources include unreported/unknown oil spills, emissions from shipping, and also from natural marine hydrocarbon seepage. Where there is a cluster of oiled birds, these are generally characterized as “mystery bird oiling events.” For small spills in the US, a responsible party is seldom identified (Europe does much better in this regard).

Oil is toxic to birds (and many other species), harming impacted birds in a multitude of different manners. Even a small amount of oil can destroy insulation created by their feathers. This can result in hypothermia and sometimes deficits in mobility that leave the birds susceptible to predation. Long-term damage also occurs from exposure to the toxic hydrocarbon components in oil. These bird oiling events can be devastating to bird populations and have ripple effects that influence the surrounding ecosystem.

Wherever possible, oiled live birds are rescued for rehabilitation. Birds that have a good medical outlook upon assessment are taken care of until stable. The birds are then washed clean of oil and put in pools of water outside to groom and feed until they’re ready to be returned to their habitat. Sadly, most rescued birds do not survive the rehabilitation process, with large differences between species. 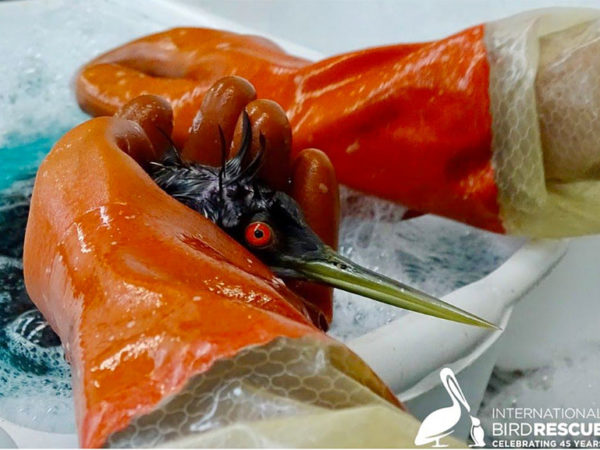 Western grebe in rehabilitation being cleaned of oil at the International Bird rescue center in San Pedro, CA.

Oiled birds are reported regularly along the coast from below Los Angeles to San Luis Obispo County in central California, often during the winter and spring months. Every year, around 200 birds are critically oiled. The most commonly oiled are water-dwelling birds which can have exposure at sea and when feeding and on beaches and in shoreline wetlands, which offer important habitat. Examples include grebes, pelicans, and ducks – among others.

The most famous mystery bird oiling event was the Luckenbach incident which occurred off San Francisco Bay. Oiled birds increasingly began turning up on the shore during winter months over a period of several years. The oil found on different birds was analyzed and discovered to have come from the same source. This source was identified in 2002 to be related to a 1953 shipwreck of a large freighter – the S.S. Jacob Luckenbach. This ship sank carrying half a million gallons of fuel which had been leaking out and oiling birds during large winter swells. Leakage from the S.S. Jacob Luckenbach killed or injured over 51,000 birds, mostly common murres but including many other species of birds and aquatic animals like sea otters. The U.S. Coast Guard employed a clean up effort where they were able to extract a majority of the oil left on the ship, thus reducing the threat to wildlife. 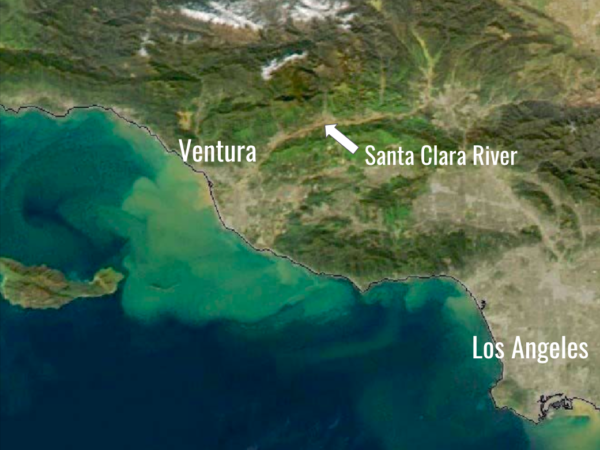 The largest U.S. “mystery” bird oiling in recent years was the Ventura Oiled Bird Incident (VOBI), which occurred after massive storms in January 2005, and is discussed in detail in a recent report.

Initially, oiled birds were observed along the Ventura coastline, eventually expanding with birds discovered across 250 miles of the California coastline. Rescue organizations recovered over 1,200 live oiled birds who were affected by this incident – thousands of birds were recovered dead.

The most impacted species was the western grebe, although there were many other affected species such as gulls and pelicans. Western grebes are in the water most of the time, resting on the surface or diving beneath to hunt. The range of species of birds found already dead was a bit more varied – with brown pelicans coming in second most abundant. Water-dwelling birds are at the highest risk for oiling events – which mostly occur on the surface of the ocean.

1,200 birds were rescued and brought in for rehabilitation to a facility in San Pedro, CA [International Bird Rescue: Blog post on VOBI]. Despite intensive efforts by rescue and rehabilitation workers, 80% of the rescued western grebes died in captivity or were euthanized. The most successful rehabilitation was of the brown pelicans. Rehabilitation of oiled birds is difficult and rarely results in widespread success. This response was considered to be relatively successful. 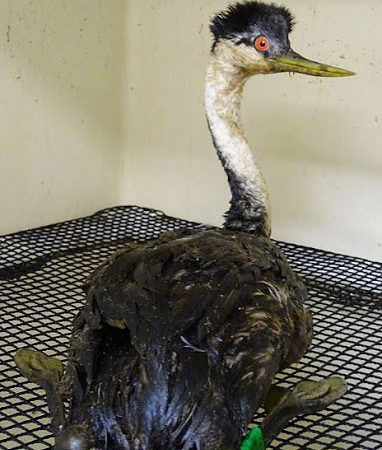 An oiled western grebe, one of the main birds impacted by the Ventura Oiled Bird Incident. Courtesy of International Bird Rescue.

Based on population estimates, a study suggested the VOBI affected up to 5% of the west coast population of western grebes with a greater impact on the breeding population – up to 25% of California’s western grebe breeding population – according to a different study (Paul Kelly, Pers. comm., 1/18/2005). Birds play an important role in the ecosystem and thus bird oilings affect the larger ecosystem. Moreover, although oiled birds are the most evident (they swim or fly to shore and wetland where they feel safer, and are found and often swim on the sea surface where oil slicks float) the oil that is affecting the birds also affects fish and zooplankton, both at the surface and when the oil sinks. However, other affected marine animals generally sink unnoticed to the seabed. Thus, birds are a bellwether for larger ecosystem impacts.

Mystery bird oiling events can be significant – the VOBI recovery efforts ended up costing more than a million dollars!

At the time of the VOBI, one oil slick was observed near the affected area, which is unexpected in relation to the magnitude of the bird oiling. Research done by Ken Wilson & Ira Leifer (BRI’s CEO) discovered that a significant source for VOBI oil was the Santa Paula Creek riverine seeps that then flowed into the Santa Clara River. VOBI occurred after a massive storm hit southern California in January 2005. This storm was powerful – resulting in a total 21 inches of rain over 4 days. The resulting flood flow in the Santa Paula Creek was the largest of such events recorded since 1933.

Evidence in the Santa Paula Creek suggested that the rise of riverine flows led to river catchments overflowing, releasing oil downstream to the ocean. Specifically, catchments filled with water and once they overflowed, oil would enter the turbulent stream flow, becoming suspended in the water column, and as surface slicks, transporting downstream. A few days after the storm, a cluster of oiled birds were found at the mouth of the Santa Clara River into the Pacific. 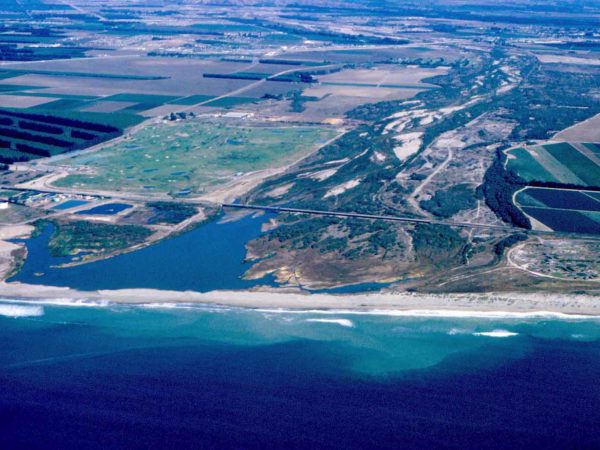 Santa Clara River mouth opening up into the ocean by Ventura, CA.

Scientists discovered the riverine source of the oil by observing the Santa Clara River upstream of the incident. Traces of oil were found along the river’s path, distributed on tree leaves (meters above the ground!) and clumped in large oil patties stuck to rocks. This suggests a huge volume of water carried oil downstream, leaving traces along the way. Another way in which scientists can identify the source oil is fingerprinting. This process matches chemical compounds in the oil to a library of source oils to try and find a match (i.e. various production oils globally as shipping and shipped oil are common sources of oil spills). Scientists fingerprinted oil found on birds and discovered that it did not match any nearby marine sources (like the COP oil field). Some samples from Santa Paula Creek were found to partially match the oil found on birds (one “conclusive” match and two “similar” matches). The chemistry, location of the oiled birds, and presence of catchment features in the creekbed with oil led to the conclusion that a source in the Santa Paula Creek, probably natural seepage, caused VOBI. 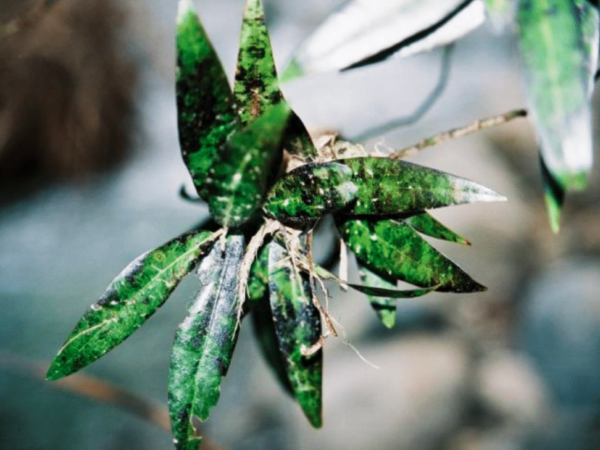 Hampering the effort to identify the source as from the Santa Paula Creek is the near absence of studies on riverine seepage or assessments of such seepage in coastal California rivers and streams. Filling this knowledge gap would be very important to improving response to similar future events, including identifying where catchment structure modifications could reduce the possibility of future events.