Goleta, CA, December 17, 2019 – Bubbleology Research International (BRI) has launched a blog-style website that explains complex aspects of marine hydrocarbon seeps to a general audience. This project will be continually added to as a review paper, “A Synthesis Review of Emissions and Fates for the Coal Oil Point Marine Hydrocarbon Seep Field and California Marine Seepage” by Ira Leifer, BRI’s CEO and Chief Scientist, is broken down into more simplistic subparts.

One of the articles for our new website, “Seepage Temporal Variability”,  is mirrored down below.

Marine seep emissions vary on short to long stretches of time due to factors such as tides, seasons, and subsurface processes that can lead to eruptions or seep death. All these variations result from changes to what drives seepage – the pressure difference between a hydrocarbon reservoir and the seabed. The liquids and gases in the reservoir are under pressure and the ocean creates hydrostatic pressure– pressure on the seabed caused by a liquid’s weight. This is the same pressure we feel when diving deep into a pool. Subsurface pressure then is released when hydrocarbons escape from the subsurface source into our oceans and atmosphere though migration pathways. These seep emissions include petroleum oil and gas hydrocarbons!

The seep system can be thought of by analogy as something more familiar: a garden hose. When the hose is full of water, but the valve is closed at the top, no water sprays out. This is because there is no permeability in the system (no way for water to escape). When the valve opens, water sprays out because the pressure inside is much greater than the pressure of the air outside so nothing is holding the water back (there is an overpressure). As the seep releases hydrocarbons, it depressurizes. The reservoir then becomes emptier and less subject to pressure from oil and gas contents. However, nature doesn’t allow this for long, refilling the seep reservoir from deeper hydrocarbon stores and establishing a new equilibrium (see illustration below). 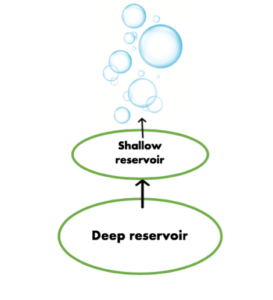 This figure shows the theoretical equilibrium created by marine seeps. The arrows show the flow of hydrocarbon liquids and gases.

In reality, the ocean is constantly changing, and seeps are always readjusting. For example, release of hydrocarbons from seeps can completely stop when the migration pathway from the reservoir out to the ocean becomes closed or obstructed. These ever-changing efforts of a seep system to reach equilibrium can be observed under the lens of semi-regular temporal variability. A hydrocarbon seep can find itself with an over or under pressure (the pressure that drives seepage) from external oceanographic changes such as tide, swell, and storm waves and surge, among others. These changes occur on timescales as short as an hour to as long as a year. Thus, increasing the amount of water over a seep (higher hydrostatic pressure) causes less emissions. It is as if the water is pushing down on the seep and holding it back. As pressure on the seep decreases (low hydrostatic pressure), the pressure increases above equilibrium and seepage increases.

Swells – smooth waves in more open water, not surf – force seepage from their changes in hydrostatic pressure. Swell pressure forcing occurs on very small timescales, from seconds to minutes depending on the water depth. Tides are another factor affecting emissions through changes in hydrostatic pressure. These rising and falling ocean levels raise and lower pressure, activating vents at low tide and deactivating them at high tide. Tidal forcing occurs when hydrostatic pressure changes which occurs within a short 12-hour cycle. The first studies on tidal forcing of seeps were done at the Coal Oil Point (COP) seep field in Santa Barbara, CA.

Tidal and wave-related changes in hydrostatic pressure are not the only factor that influences hydrocarbon release. Seasonal factors such as storms also can influence the variation in seepage with time. Storms drive large waves that “pump” the reservoir, leading to increased emissions. Specifically, the relationship between pressure and emissions is imbalanced. As a result, lowering pressure increases emissions more than increasing pressure decreases emissions – “pumping”. Given that storms are seasonal, this drives a seasonality in emissions.

Aside from external factors, there are subsurface factors such as gradual reservoir depressurization, that can change emissions on short to long times. Strong changes in hydrocarbon release are even seen from year to year. Although such long-term data are very rare, the aforementioned COP seep field has provided insight thanks to continuous air quality monitoring for decades. Internal changes can also occur from human activities. For example, an oil platform, Platform Holly, was placed in the COP seep field and began producing oil in 1969. Its actions removed hydrocarbons and pressure from the reservoir. Two sonar studies many years apart showed a significant decrease in emissions decrease.

Another factor that influences seepage is the type of sediment a seep is located in. Loose sediment causes more variability since shifting of sediment contributes to changes in pressure similar to the hydrostatic pressure changes. Seep sources or vents within rock are less variable due to their stable surroundings and structure. Although these examples of temporal variability are relatively reliable and follow a time pattern, marine seeps also are subject to spontaneous, expulsive releases or explosions. 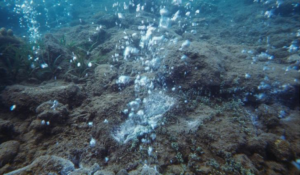 Our current understanding of marine seepage suggests that seepage is a highly sensitive system subject to small changes in pressure. Understanding the changes in emissions from hours to seasons apart helps understand how to extend emissions estimates from a measurement campaign to annualized values. This research provides insights into how the same changes also occur in emissions by man-made, subsea oil leaks – such as a pipeline leak. Pipelines underwater act by the same principle as the garden hose and the seep – when a leak creates permeability the contents under high pressure (in the pipe) will flow out.