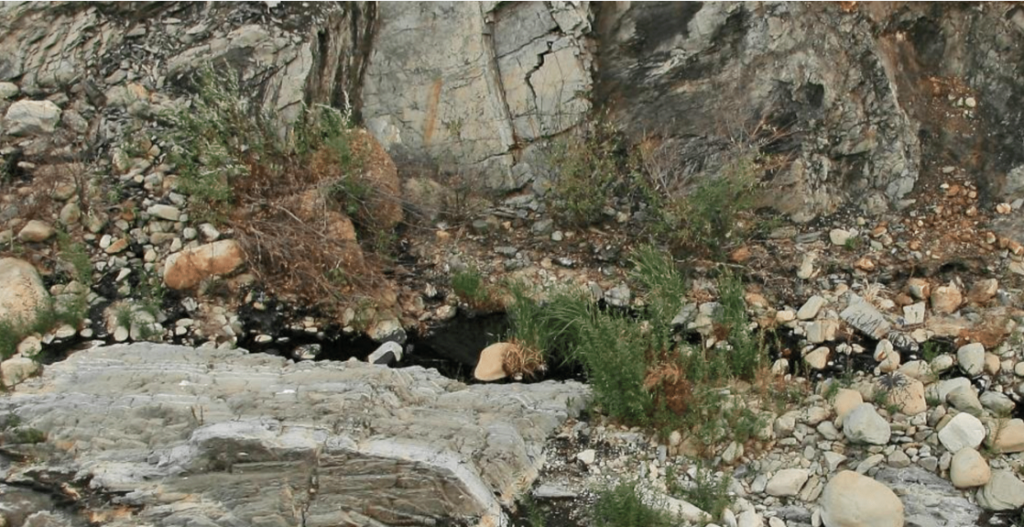 Terrestrial (onshore) oil seepage occurs globally in petroleum basins. When this seepage is in rivers or creeks or nearby, oil seepage can travel downstream. Riverine oil seepage includes seeps located in or near non-marine bodies of water such as rivers, creeks and lakes. Ultimately, riverine seepage can transfer seep oil downstream to the ocean. Transport to the ocean is particularly efficient if the travel distance to the ocean is short. Longer journeys can be obstructed as oil deposits onto vegetation and/or is buried in the sediment. For example, seepage in the Amazon River mouth is certain to reach the ocean, whereas oil seepage in the San Joaquin Valley, Central California, that reaches nearby streams is far more likely to deposit in the riverbed/streambed rather than reach the distant ocean.

When oil seeps from underground reservoirs whether on land or sea, there can be significant ecological impacts. Oil is toxic to many organisms (and humans) who may come into contact with it. Thus, oil exposure to an ecological community can induce a rapid shift in species composition. Species that better tolerate the petroleum hydrocarbons will thrive while others struggle to survive. These adaptation pressures exert long-term composition effects on riverine and other ecosystems. When riverine seepage reaches the ocean, it can have long-term, drastic ecological effects on marine life, and thus should be considered when assessing the overall impact of seeps on the marine environment. 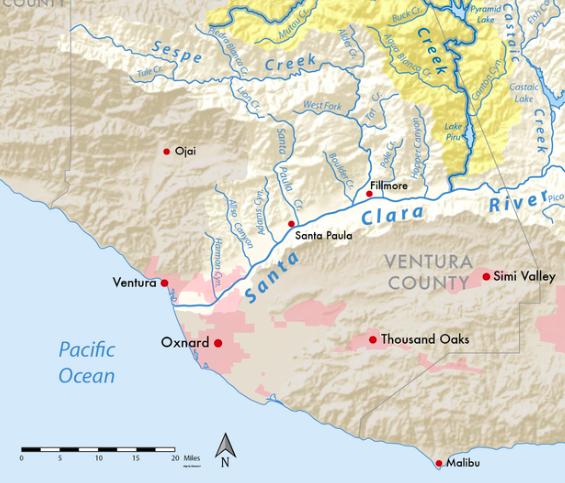 One studied example of riverine seepage occurs in the Santa Paula Creek. Here, the same hydrocarbon reservoirs that feed the Coal Oil Point seep field also underlie and feed riverine seepage in the Santa Paula Creek, a tributary of  the Santa Clara River. Here, tar was found on vegetation and oil was seen accumulating in pools. Riverine seeps are subject to some of the same processes described for marine seeps, although there are other important factors. Specifically, if the tar is outside the river bed, it must flow to the water. This flow is faster and further in summer when it is hot. By contrast, as winter sets in, cold weather hardens the tar and it is unlikely to reach the river or creek. Additionally, tar and oil in riverbeds can be eroded and released into the flow, which then transports it downstream.

Oil in river systems can collect in pools called catchments. Catchments can be natural (formed from fallen vegetation and rocks) or manmade. These can either prevent downstream transport of oil or allow oil to float on the surface of these pools which, in fact, increases the probability that this oil will reach the ocean.

Photomosaic of the northern stream bank of the Santa Paula Creek in 2007-2008.

Seepage is found all along the Santa Paula Creek. Out of these many seeps, the Culvert Seep Area (CSA), Grass Clump and Hole Seeps (informally named) are thought to contribute to a hefty pool of oil collection (or a large catchment): the Thomas Aquinas Oil Pool, named for its proximity to Thomas Aquinas College. By one estimate, this pool could have contained around 10,000 liters of free oil held in its river bank. Downstream, many other seeps litter the creek leaking oil and gas from underground reservoirs.

Another oil pool, named the Dead-Duckling Oil Pool (DDOP) also had thick oil floating on its surface and lies downstream of the Culvert Seep. Over time, water flow had rearranged the streambed allowing some oil to pool in a secondary channel that was isolated by receding water levels. The oil supplied directly to this pool comes from the Cactus Slump Seep Area. These seeps were found to be the most active in the Santa Paula Creek area. They include West Sowby-Cactus Slump, and Headland seeps. The DDOP appeared to be growing rapidly when surveyed in 2008 – found to be around 1500 liters. As such, this accumulation posed a threat to wildlife as an oil pool overflow would spill over into the surrounding ecosystems. The Dead-Duckling moniker was even given in memory of five dead oiled ducklings. 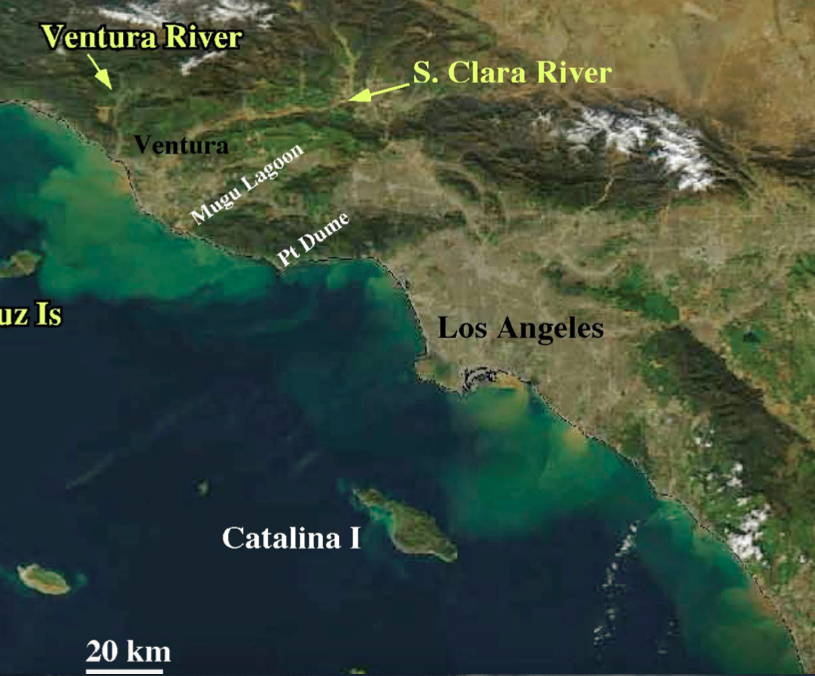 Rivers dumped sediment and oil into the oceans during a large storm in January 2005. Santa Clara River labeled.

The pools in all seeps – like the ones just discussed along the Santa Paula Creek – can overflow and be released to flow downstream when river levels rise. Higher fluvial flow – when sediment is in more rapid motion – allows oil to bypass areas it would usually pool in and be sedimented (buried) or adhered to vegetation. Higher river flow also reduces the likelihood that oil catches on vegetation while also uncovering oil-bearing sediments releasing this oil into the stream. Large storms cause freshwater stormflows as river catchments overflow and high volumes of water rush downstream. With these stormflows comes sediment, vegetation, debris, and if a terrestrial seep is nearby – oil. The large pulse of water from a storm is more likely to reach the ocean than the otherwise constant trickle of water and oil.

Currently, virtually no attention has been focused on riverine seepage. This gaping hole in our knowledge of these seep systems prevents us from understanding the impacts these systems have on ecosystems. Characterizing and studying riverine seeps as is done for many marine (and some terrestrial) will expand our understanding and potentially mitigate unnecessary risk to local ecosystems.