Hydrocarbon seeps can be found both on land (terrestrial seeps) in the sea (marine seeps), and even in lakes (lacustrine seeps) releasing hydrocarbon gases and in some cases, oil that has migrated from subsurface reservoirs. Control of the seepage is imposed by the geology – Geology Rules! – which dictates where the seepage is (and where it is not) how strong it is (or if it is quiescent), and whether it is likely to erupt.

Finding and studying marine seeps is made easier thanks to the bubbles they release compared to the invisible gas emissions that diffuse through soil and the overlying vegetation canopy. These bubbles can be observed by sonar systems even in deep waters. Detection of seeps on dry land is not so simple. Many seep gases are odorless and colorless. More information on seep gases can be found in the Seep Air Quality article. Thus, most terrestrial seeps go completely unnoticed despite the potential of a horrible risk. In 1985, trapped methane from a terrestrial seep ignited in the basement of a clothing store in Los Angeles, causing a destructive and deadly explosion. 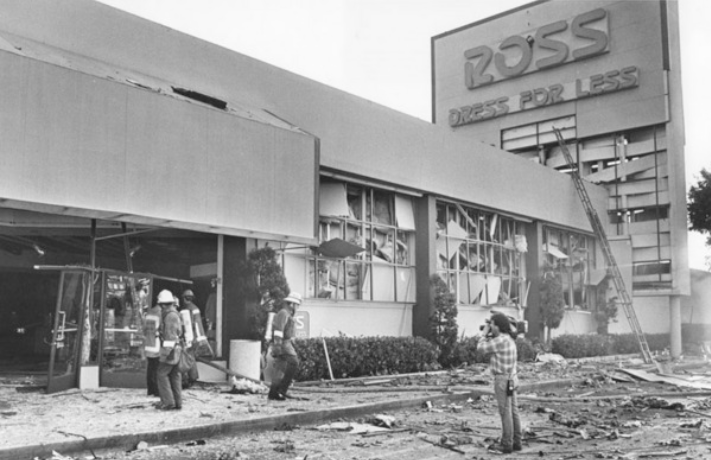 Seep geology describes the structural setting and controls of the rock layers ranging from the reservoir formation layer(s) to the Earth’s surface. The bedrock or foundation to understand seep geology, is Geology Rules!

Firstly, there can’t be seepage unless there is a reservoir formation with hydrocarbons (oil and gas) that were exposed to high pressure and temperature over geological times – many millions of years. There also needs to be a trap, such as an anticline (a crest of the formation) or structures associated with faults that allows the accumulation of buoyant hydrocarbons. No accumulation means there is nothing to seep. Furthermore, the reservoir formation must be permeable to allow migration of isolated pockets of oil and gas into the trap. The trap needs a capping layer – otherwise the migrating oil and gas would have escaped to the ocean and atmosphere in prior geological ages, leaving nothing behind to seep. Finally, there must be pathways through the solid rock overlaying the reservoir – the capping layers – or there will be no migration of seep hydrocarbons to the surface. The character of the seepage then depends on the geology of these migration pathways as well as what types of oil and gas are in the reservoir. 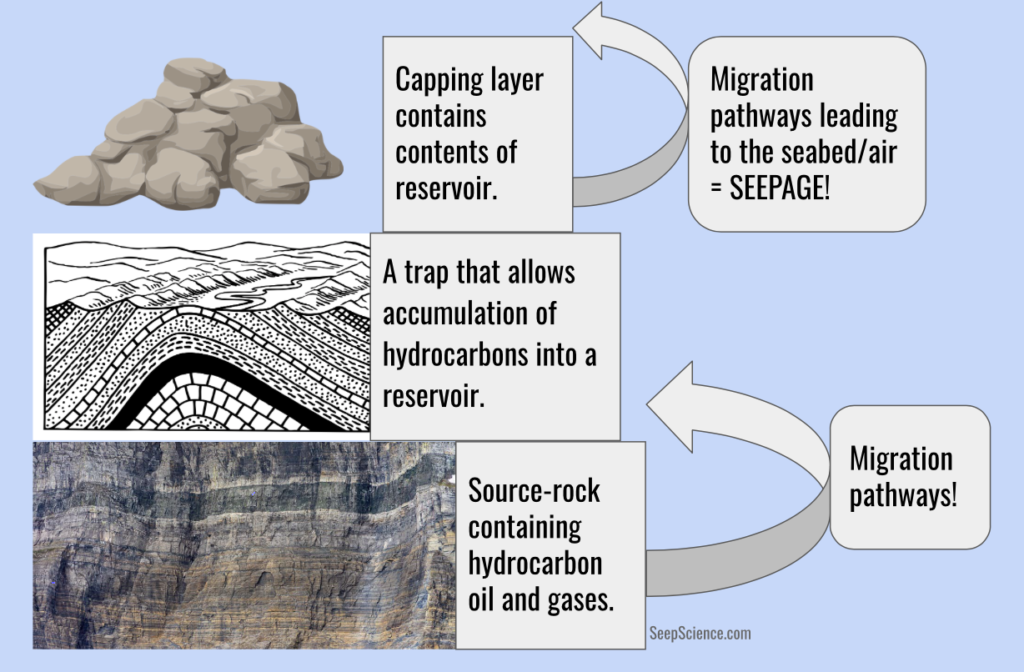 But Geology Rules! raises many questions. Where do the oil and gases released from the COP seep field come from? Why is the field in shallow water? And why is it near Santa Barbara? Why is seepage focused at certain points?

The answer to these questions lies in the geology – the rock formations and geologic structures that govern the characteristics of these famous seeps.

The COP seep field’s source formation (where seep hydrocarbons come from) is the Monterey Formation, which also is the source formation for much of California’s seepage and oil production. The source formation contains hydrocarbons primarily from the decomposed bodies of ancient marine organisms. This sedimentary rock formation is from the Miocene Era, dating from 5 to 23 million years ago. There were already many of the animals we see today like bears, crows, and fish, but fewer ocean invertebrates than earlier eras. 19 million years ago, a rift valley opened in what we now know as the Santa Barbara Channel. During the next 12 million years uncountable plankton and zooplankton fell to the seabed and were ultimately buried. These hydrocarbons were compressed and “cooked into kerogen” by millions of years of high pressure and temperature from the weight of the rock (sometimes referred to as dinosaur goo). This kerogen still forms today under the channel, with the oil and gas migrating upwards along the formation rock which tilts upwards towards the Santa Ynez coastal Mountains.

Importantly, the Monterey Formation is highly fractured, allowing for hydrocarbon migration across bedding planes into the traps. These traps are formed by faults.  Even where no suitable fracture exists, the oil only has to wait until an earthquake creates one, perhaps years or millions of years, but oil is patient. 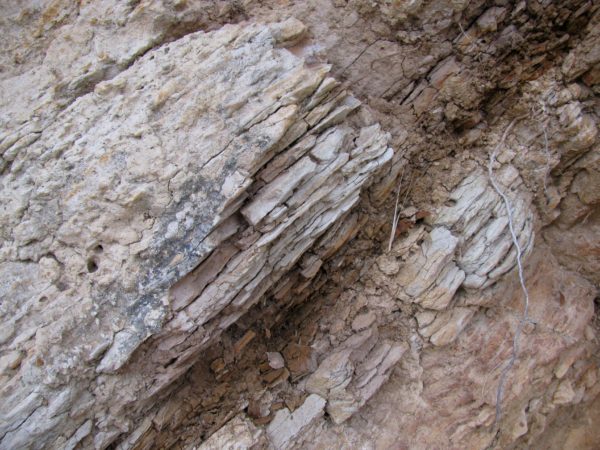 An outcrop of the Monterey Formation seen in Gaviota State Park north of Santa Barbara. The rock in the middle is darker due to high levels of oil and tar.

The Monterey Formation is shallower offshore Santa Barbara in both the Concepcion and COP seep fields than elsewhere along the northern Santa Barbara Channel coast. Thus, oil and gas  migrate in the Monterey Formation along the coast to the shallow locations of these two prolific fields. This can be seen in the figure below where the Monterey formation (in blue) rises to the seabed (outcropping) in the vicinity of the seeps. 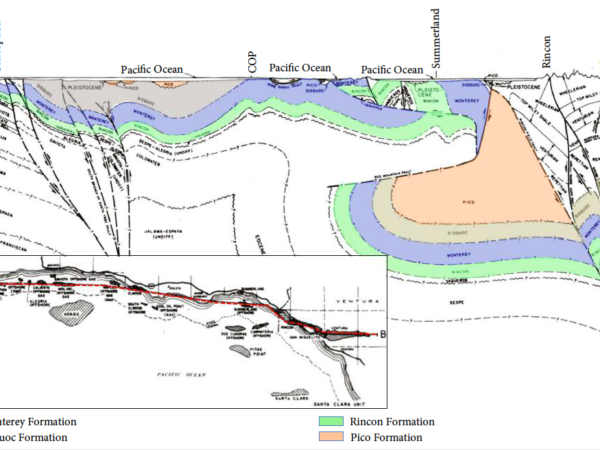 A north-south transect of the northern Santa Barbara Channel from Point Conception to Ventura. This shows what would be seen if we cut straight down into the earth and pulled it out like a slice of cake.

The primary Monterey Formation trap that feeds the seeps with oil and gas lies about 1 km (0.6 miles) under the seabed. The trap is capped by the Pliocene-age formation – the Sisquoc Formation. This more recent rock dates from 2.5 to 5 million years ago. The Sisquoc cap seals in (mostly) the reservoir formation, allowing hydrocarbons migrating upwards from deeper under the channel to accumulate in the Ellwood Anticline.

The seep field lies in shallow waters due to the same geological process (faults and other tectonic motions) that created the Santa Ynez coastal Mountain range and the deep Santa Barbara Channel. Seeps are prolific in water from ~80 m (240 ft) to the intertidal swash zone near the Coal Oil Point, where Monterey Formation rocks protrude from the beach at low tide. 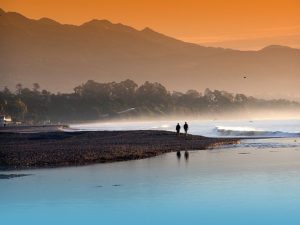 A view of the beach and Santa Ynez Mountain range in Santa Barbara, CA – a beautiful product of geology!

The specific location of a seep is determined by the seabed geology and whether it’s conducive to the leakage of reservoir hydrocarbons. Seepage enters the ocean/air via fractures or cracks in the capping layer. These migration pathways funnel the hydrocarbons out of the underlying reservoir.

Tectonic stresses on rock layers cause faults and fractures that serve as migration pathways. The formation. In the COP seep field, the hydrocarbon trap is an anticline formed by folding of the Monterey Formation. This folding is non-compressional and creates a fault system and damage zone that penetrates the capping Sisquoc Formation, providing migration pathways to the seabed. Where the anticline and fault system are crossed by other faults, chimneys of fragmented rocks are formed that provide multiple migration pathways and intense seepage. Thus, if one pathway becomes sealed with tar, there are plenty of other seepage pathways for migration to the seabed or open air. Other faults are associated with compressional stresses – where the Earth’s crust is pushed together – that squeeze closed potential migration pathways. Migration does not occur through these faults and fractures. 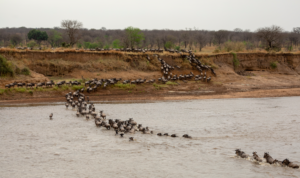 Geology Rules! must be followed perfectly to form a seep. COP seep field has hydrocarbons from its source-rock (the Monterey Formation), it has many migration pathways via fractures and faults, and it’s capped by the Sisquoc Formation.