BRI has conducted mobile air quality laboratory surveys since 2014. These surveys have been to estimate emissions from a variety of sources including oil & gas, husbandry, landfill, natural seepage, pipeline leakage, and volcanic, and to assess air quality in diverse communities, as well as to validate airborne and satellite data. The first BRI development was AMOG Surveyor™, an air quality measurement laboratory in a Nissan Versa that measured 12 different trace gases at ppt to ppb levels. AMOG Surveyor was employed in numerous studies, from husbandry emissions to gas pipeline leaks (see full list of AMOG publications below*).

AMOG Surveyor at a research dairy.

AMOG has since been retired to allow Standard Instrumentation Suite: Truck Enabled for Response: SISTER™ to take its place as the BRI air quality survey workhorse. SISTER now allows for off-road surveys and comprises a more complete (and heavier) payload than feasible for AMOG Surveyor. Underlying this generational change was a breakthrough in how to measure winds from a moving pickup truck.SISTER has been in use by BRI for the last 2 years and has conducted many studies of seep emissions, oil and gas emissions, and dairy emissions, including the recent BRI’s 2020 investigation of air quality at the Ports of Long Beach and Los Angeles during and after the Covid shutdowns.

At the start of 2021 BRI updated SISTER to SISTER 2 in order to update performance and add additional measurements;  thus, SISTER 2 has become the latest iteration of BRI’s mobile air quality laboratory. A notable feature of all SISTER models is BRI’s custom software that provides real-time GoogleEarth visualization of trace gases and winds to facilitate adaptive surveying which modifies survey plans to improve data quality.

SISTER evolution. Pre-SISTER towing AMOG. Proto-SISTER during an anemometer test – hence the two anemometers, SISTER 1 at the Port of Los Angeles, SISTER 2 returning from a survey at the Ports). 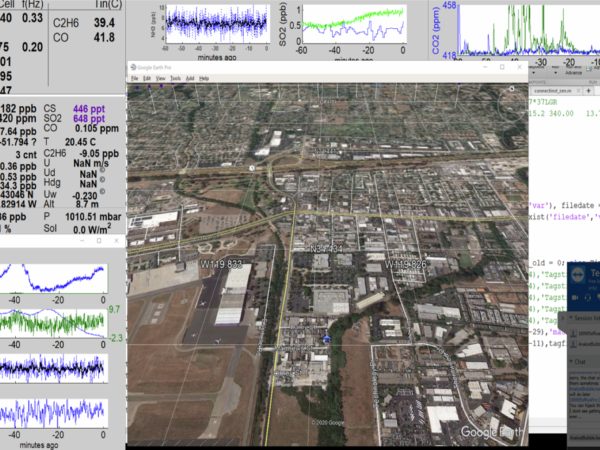 Over the last six months, SISTER has undergone major improvements in its structure, analyzer systems, power, and other subsystems. Most analyzers were sent to their manufacturer for repairs and upgrades. Notably, an upgrade to the ammonia analyzer for higher flow and to improve time response by minimizing “stickiness” blurring of plumes and other structures in the ammonia data  (link to page on the ammonia sensor). The Geiger counter (detecting ionizing radiation) was repaired and has a new mount that places it beyond the truck’s structure to avoid TMOG blocking of radiation. The methane isotope analyzer was repaired. A new converter and photodetector were installed in the SO2/H2S analyzer, improving signal-to-noise ratio. The fast greenhouse gas (FGGA) analyzer had its internal computer replaced. A nano aerosol size analyzer (a differential mobility analyzer) was installed that measures from 10 – 1000 nm and the dust aerosol size analyzer (0.2-32 µm) was factory recalibrated. Probably the only analyzer not refurbished or improved was the ceilometer!

Structurally, the most significant update was raising SIS’s roof, which greatly improved air conditioner performance in terms of cooling the analyzers inside. The increased internal space eased working on the cube with a number of items moved onto the higher roof, such as the mount for a monitor. The higher roof also necessitated redoing the gantry crane system for loading SIS onto TMOG.

In terms of power capabilities, a new 240-volt, 7k-Watt surge generator was added to power SISTER requiring a new panel. Analyzer power is provided by a new, 3000 VA dual conversion UPS was installed, providing medical grade power to minimize electrical noise in sensor and analyzer data. Also, a backup battery was added to the UPS  providing additional time to respond to a temporary power loss, for example if generator fuel runs out. A DC power distribution system was installed that included a “clean” linear DC power supply for sensors and several switching power supplies to power communications and other non-science equipment (i.e serial servers, time machine, fans) at multiple voltages. Further, a 1 kW inverter powered off of TMOG was installed to help balance power use for pumps, fans, etc..

To summarize – SISTER 2 is ready for test drive trials and then field surveys with several first missions already scheduled, including further surveys at the Ports of Long Beach and Los Angeles and at California oil fields.