One unexpected silver lining of the COVID-19 crisis is a massive reduction of air pollution as people shelter in place. This sudden economic slowdown also has rendered the busiest port in the U.S. rather tranquil. The Ports of Long Beach and Los Angeles see over 20% of all the cargo coming into the U.S. They’re usually bustling with activity, but along with everything else, things have slowed down. To investigate and document these changes, BRI mobilized SISTER* on TMOG for a Rapid Response survey+ to look at the changes in the air quality at the ports. 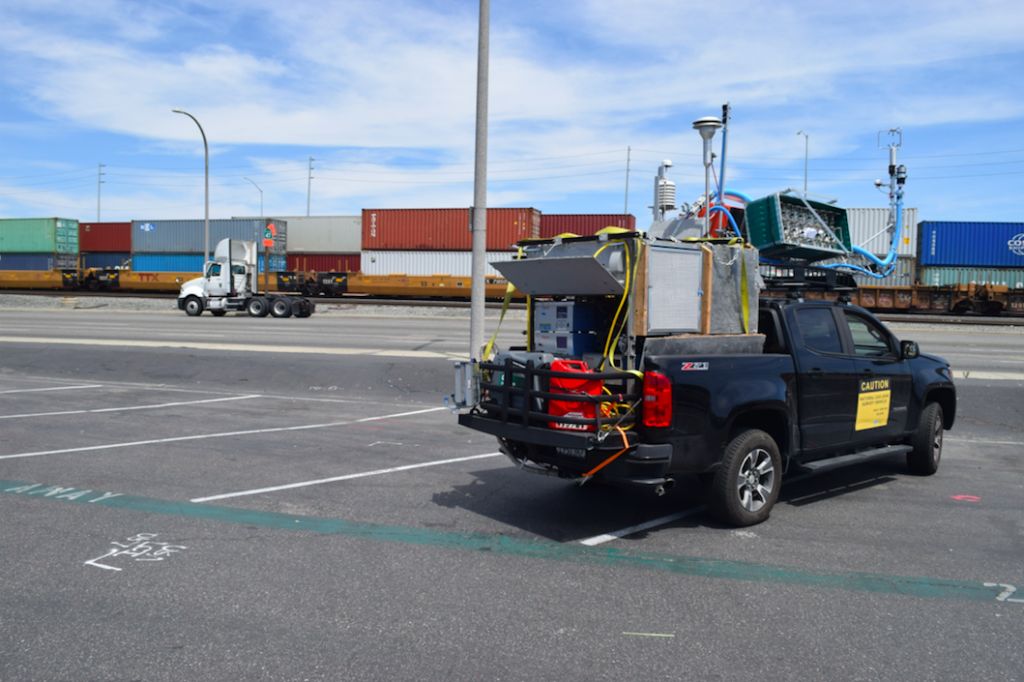 TMOG equipped with SISTER in front of shipping containers at The Port of Long Beach.

The BRI team loaded SISTER into TMOG and drove to the Port of Long Beach last Wednesday (May 6, 2020). A year ago, BRI surveyed the same roads and area, downwind of these very busy ports and saw surprisingly high levels of air pollutants like ozone and nitrogen oxides – the highest BRI had ever measured.

The port was quiet in a way never before observed – only one of the large gantry cranes were moving, and there were very few trucks on the 710 port highway and other roads – normally there are lines of trucks extending for miles! Real time data clearly showed the air was much cleaner, with nitrogen oxides decreased as much as 90%. 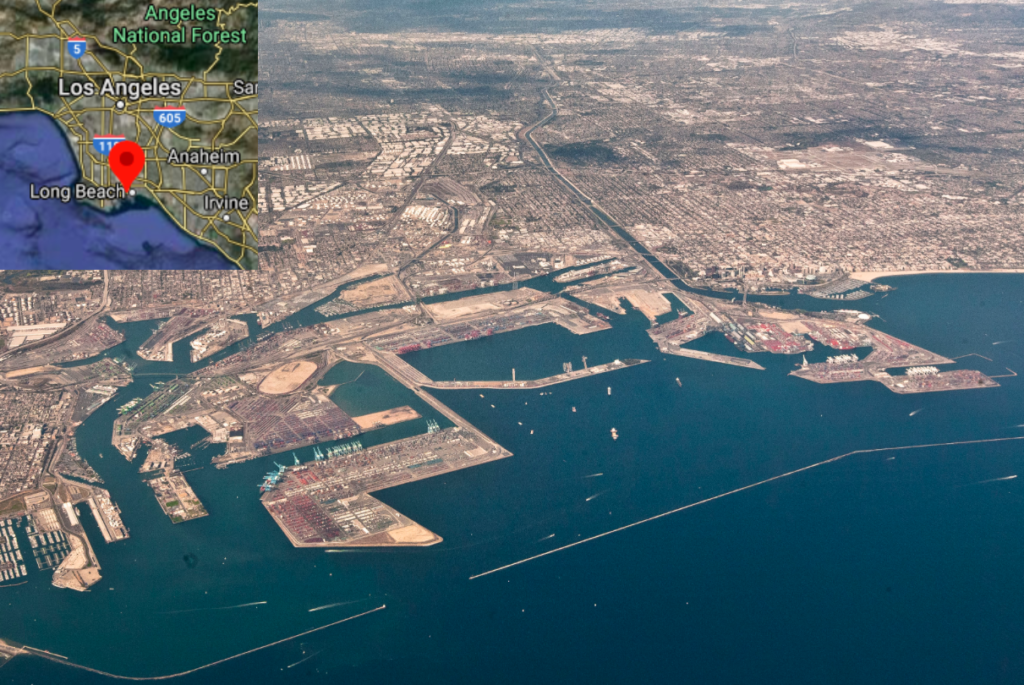 Aerial shot of the port with a map inlay showing the location of the port relative to the larger Los Angeles area.

In our Rapid Response surveys, turnaround is very important. Mobilizing SISTER only takes an hour or so, allowing the BRI team to accomplish air surveys within a work day for many relevant locations in central and southern California. Real time data visualization allows the team to collect sample canisters at targeted locations for later laboratory analysis at the University of California, Irvine, Blake laboratory. Real time data visualization also allows collection of repeat data for more important areas.

For detailed analysis, post processing applies calibrations, layback times (the delay for the sample to be drawn down ~20 ft of tubing), regrids to a uniform timebase, and generates Google Earth visualizations and other plots at near publication quality. To meet rapid response needs, post processing is automated once files are uploaded to a server. During this survey, post processing was mostly finished while TMOG was returning to the BRI office. For example, the maps and plots below were ready late the same evening as the port survey. 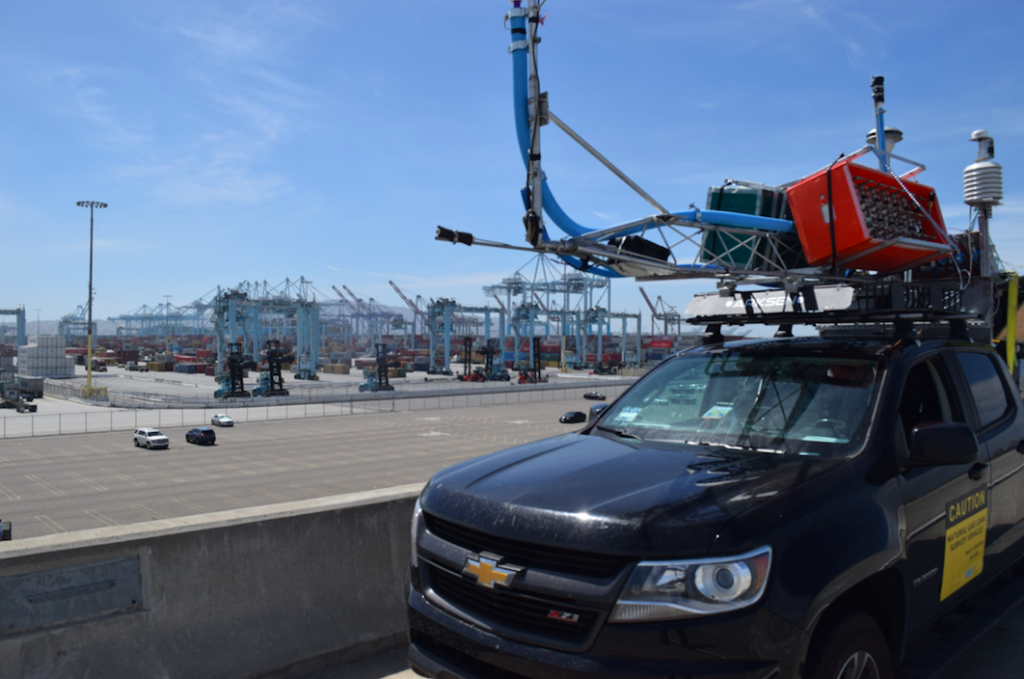 TMOG with SISTER with the Port of Long Beach in the background.

The survey documented the significant improvement in air quality compared to the year prior. Specifically, NOX (nitrogen oxides) levels for the Port of Long Beach were ~30 ppb whereas the year prior they were as high as 300 ppb. Nitric oxide was the dominant component of NOX, indicating the freshness (i.e., locality) of the pollution. The primary source of NOX is cars and trucks and cranes and other industrial activity. NOX reacts with volatile hydrocarbons (like those in gasoline and other fossil fuels) to form ozone which can cause lung damage nearby these sources and far away as winds transport these gases. Ozone was significantly lower than the year prior, yet was still above 50 ppb – surprisingly high given present stay at home orders. (The main sources of ozone include transport and industrial emissions.) Ozone levels also were elevated for data collected at near the end of the Navy Pier, under a strong onshore flow. Meanwhile clear plume signatures were observed downwind of refineries.

BRI plans additional surveys over the next few weeks to map the changes in air quality as industries and activities resume (and potentially come to a halt once more later on). These critical data will provide important and unique insights into the relationship between industrial and commercial activities and air pollution. 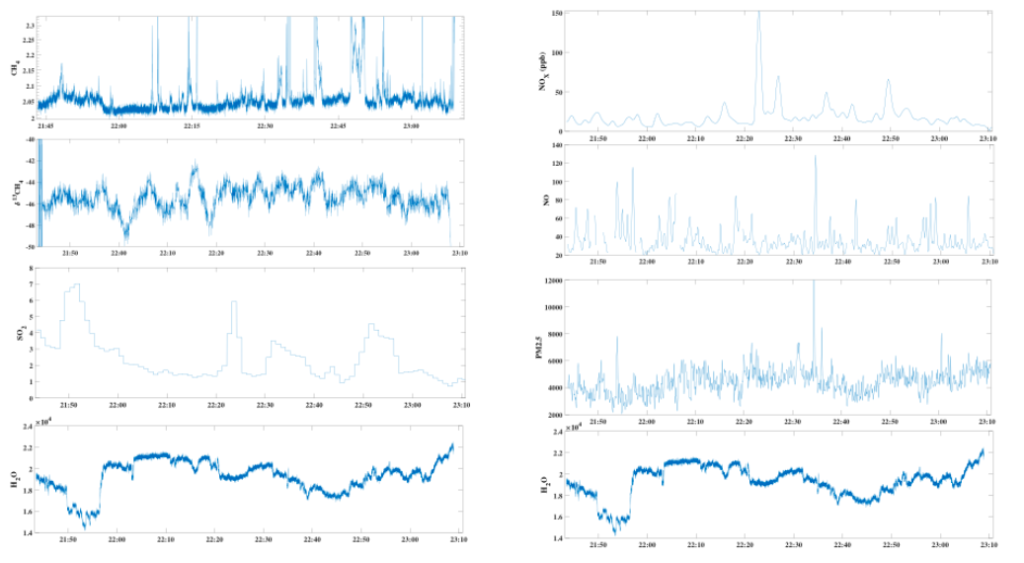 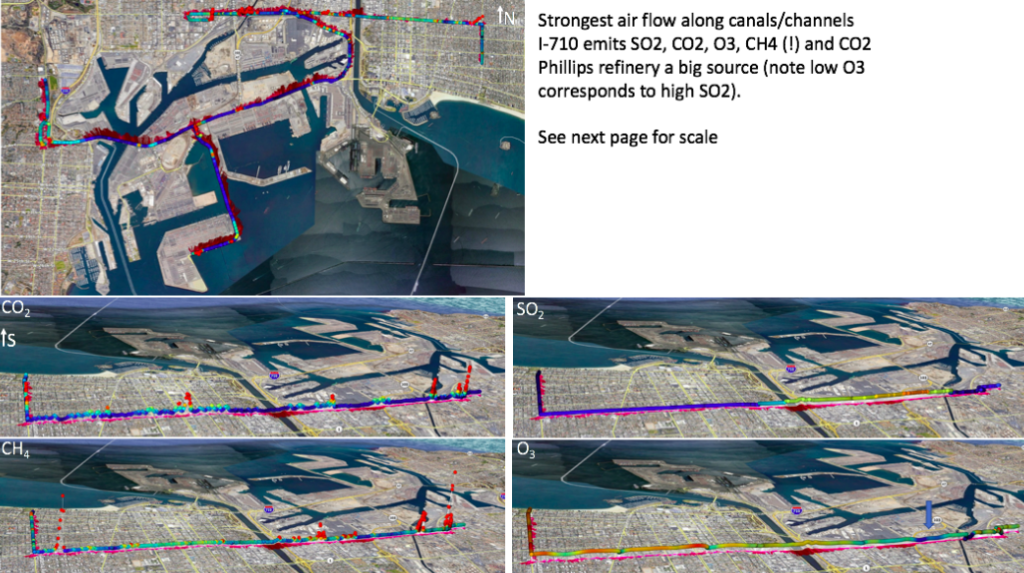