Animal husbandry produces the potent greenhouse gas methane and also ammonia, which indirectly affects climate. However, emissions vary widely with few real world studies available. Underlying this uncertainty are husbandry practices that differ with seasons, between dairies, and between regions. In a NASA-supported study, Bubbleology Research International (BRI) led an international team to show that combining remote sensing with advanced mobile analyzers provides a new and powerful tool. The team’s recent findings were published in the prestigious journal, Environmental Pollution.

“We designed a holistic experiment that could characterize emissions including fingerprinting activity from multiple gases at a range of scales – from a region to building,” said Dr. Ira Leifer, BRI CEO and chief scientist. “We acquired and analyzed data from satellite, airborne remote sensing, mobile surface in situ analyzers, and mobile surface remote sensing.”

The experiment leveraged the remote sensing strength of the key atmospheric trace gas ammonia, with Aerospace Corp., flying the hyperspectral imager, Mako, to make remote sensing maps of ammonia. Ammonia is important to the aerosol formation, which reduces the sunlight reaching the surface, affecting climate. Ammonia also causes human health problems and damages the streams and wetlands where it settles.

“Emissions validation was a primary campaign goal. We succeeded in getting 95% agreement between MISTIR and AMOG based on the best model,” said Dr. David Tratt, the lead Aerospace Corp., scientist for this study. MISTIR is a unique Aerospace facility – an upward looking remote sensing instrument that measures column ammonia and other gases like methane while driving at up to highway speeds. MISTIR’s column measurements cannot miss a plumes even if they pass overhead. The best model used all available information to estimate emissions.

The study looked at the Chino Dairies of San Bernardino County, currently ~45,000 cows on ~63 small dairies that have been providing milk Los Angeles communities since the 1920s. Today, these dairies are surrounded by the densely populated Los Angeles Basin. Chino dairy herd density is amongst the highest in the US.

In recent decades, Chino area urbanization has converted many dairies to suburban developments. This led to an important discovery. In both remote sensing and AMOG data, diffuse plumes were observed arising from housing developments to the southeast of Chino but not to the northwest. The key difference is that several decades ago, communities to the southeast of Chino were dairies but those to the northwest never were. This clue also helped explain ammonia data from the European IASI satellite. Analysis of IASI data showed a factor of ten between ammonia in summer compared to winter.

“It was very puzzling. The winter-summer difference is much larger than expected; however, it makes sense if it reflects legacy emissions, which are not currently considered. Look, if dairy land can emit ammonia decades after conversion to housing, it could easily explain the seasonality. And legacy emissions need to be considered in planning – effects seem to last much longer than anyone thought.” Leifer said.

“The potential from the continuous coverage of satellite data is vast, particularly when connected to husbandry practices,” said Professor Tryg Lundquist, a husbandry scientist at the California Polytechnic State University, San Luis Obispo, California. “Our research intends to share with dairymen best practices to improve the environment while maintaining the high quality of California dairy products.”

Satellite data played a critical role in the study, it was the annual cycle revealed in IASI ammonia data that raised the question about legacy emissions. “Satellites provide long-term continuous observations over years that are key to understanding seasonal processes. As such they are highly complementary to the type of data collected by field campaigns,” said Dr. Lieven Clarisse of the University Libre de Bruxelles (ULB), Belgium.

Additional satellite data are being collected for the study by the Japanese Space Agency (JAXA) satellite, GOSAT. “ GOSAT has been targeting Chino husbandry area every 3 day for more than three years with 10 km footprint from space. Combination of the holistic surface and airborne measurements with the satellite column methane data provides accurate and seamless flux information from the surface to the top of atmosphere,” said, Dr. Akihiko Kuze, a JAXA scientist.

If you would like more information about this topic, please call Ira Leifer at 805-683-3333 or email ira.leifer@bubbleology.com

Sidebar: Ammonia Measurement: A Key Challenge. Ammonia is very difficult to measure because it is a very sticky gas. BRI has a mobile atmospheric lab built into a Nissan Versa that was used in this study, AMOG Surveyor. The AMOG Surveyor was developed to validate of airborne and satellite remote sensing for NASA. AMOG analyzers measure 13 trace gases and meteorology at up to highway speed. Analyzers include a high flow, ultra-precise ammonia analyzer from Los Gatos Research. It is the only analyzer that is high flow, which counters the stickiness of ammonia.

Side Bar: Remote sensing: What is it? Remote sensing uses spectral features in light to determine the column of gas. The light in a spectral feature is absorbed, which changes its color, like looking through colored glass. The deeper the feature, the stronger the color and the more gas there is. The spectrometer is an optical instrument that separates the light into all its colors so that each color can be looked at individually. Satellite, airborne, and surface remote sensing are in use for many purposes. The hyperspectral airborne imager, like Mako, produces a “map” of 128 colors in each pixel.

Animal husbandry, including dairies, are important to the global economy but also have impacts on air, water, and land. There are 1.5 billion cows today according to the UN Food and Agriculture Organization.

The Chino Dairy complex is around 63 dairies with around 45,000 cows, located in the Los Angeles Basin. Its ammonia emissions from waste were able to be studied from space. Satellite data is seven years and is from the IASI instrument. Surface concentration in parts per billion (ppb) is from AMOG Surveyor and is shown as colored circles. 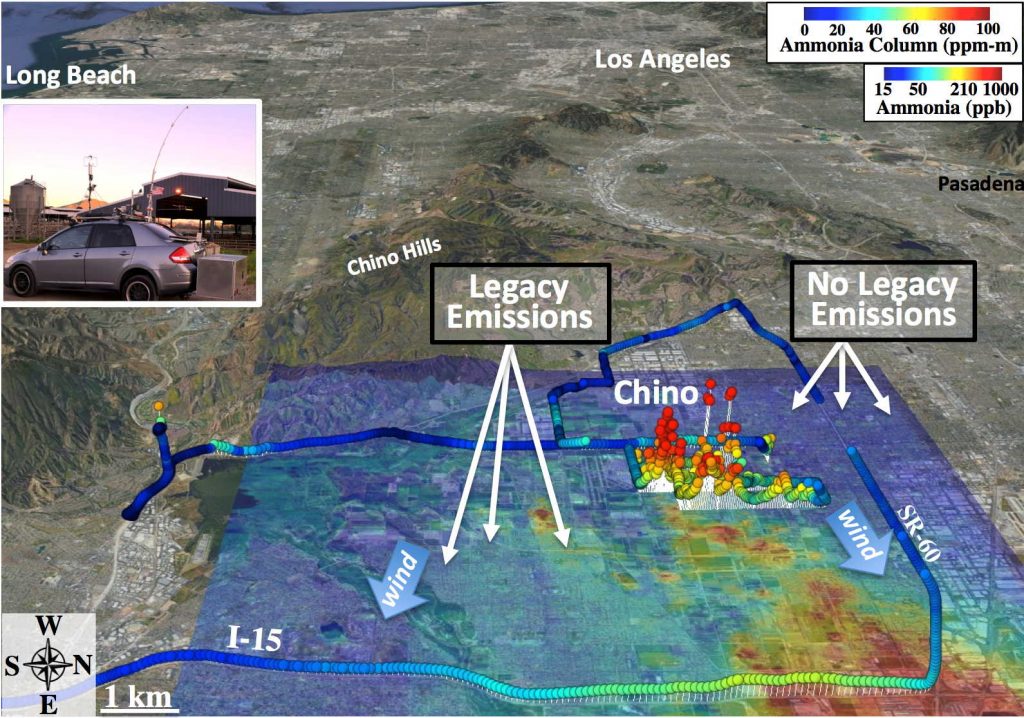 The many dairies of Chino each emit plumes of ammonia, both small and large, that high resolution airborne remote sensing can map, shown for Mako Instrument, The Aerospace Corp. Meanwhile, AMOG Surveyor (see inset at the Cal Poly dairy) drove on public roads, capturing both the broad downwind plume and the very strong plumes near the individual dairies.