Goleta, CA, February 18, 2019 – Globally, wealth is rising and populations are growing. Combined with shifts in people’s diets as their wealth increases, the environmental footprint from animal food production is worsening. Adding to this are industry trends that magnify husbandry’s impacts. These impacts affect water, soil, air, and even human health.

Bubbleology Research International (BRI) and The Aerospace Corporation (Aerospace) completed a study that demonstrates a new tool to better understand the health and other impacts from dairy gas emissions. The study used airborne remote sensing, mobile surface concentration measurements, and satellite observations. The study showed that exposure estimates derived from this new tool can be used to study health effects of living and working near dairies.

“We want to use satellites because they are always watching – they record data every day, which mirrors how local people are affected by emissions – they are breathing air every day,” said, Dr. Ira Leifer, the Chief Scientist, and BRI CEO. Sadly, gases such as hydrogen sulfide, which affect human health, are not currently observable by satellites. Thus, we used a gas that satellites can see combined with ground data to estimate what exposure people may have had depending on where they live.

Hydrogen sulfide is emitted from anaerobically decomposing organic matter such as in sewage and animal manure, and it can be hazardous when released into the air, water, or soil. “There are many other gases that need to be added to the study”, said Dr. Leifer.

The study examined emissions from the California Polytechnic State University dairy (Cal Poly dairy), a real-world, working, teaching, and research dairy. This site has advantages in that cows at the dairy are treated just like cows at a commercial dairy. “It is great to be able to work with air quality scientists to better understand dairy emissions and look for simple methods to decrease them,” said Tryg Lundquist, a Cal Poly environmental engineering professor with expertise in dairy waste management.

The researchers flew Aerospace’s Mako instrument over the Cal Poly dairy and made ammonia maps at yard length scale. Mako is a high-resolution, thermal imager with the sensitivity and spectral resolution to remotely measure atmospheric trace gases from an altitude of several kilometers. “Our high-resolution data permitted us to identify the dairy practices that were causing emissions,” said Dr. David Tratt, Mako chief scientist. Separately, AMOG Surveyor drove downwind and determined how much ammonia and hydrogen sulfide were emitted from the Cal Poly dairy.

The scientists then applied the ratio of these two gases to satellite observations of ammonia for the Chino Dairies, located in the east Los Angeles Basin. This was used to estimate hydrogen sulfide exposure for the nearby downwind communities. The Chino Dairies are comprised of 45,000 cows in 67 dairies, surrounded by the dense urban developments of Los Angeles.

The scientists used the Cal Poly ratio of in situ hydrogen sulfide to in situ ammonia to scale the satellite data. This approach is termed a dual trace gas approach, and resultant maps provide exposure estimates for use in health effects studies.

This demonstration study showed a new tool to greatly improve human environmental health studies, identifying that downwind communities can be exposed to dairy husbandry emissions. “The power of the satellite data is it captures the seasonality – this hypothesis is important to test how dairy emissions might continuously affect nearby communities”, said Meredith Franklin (University of Southern California). 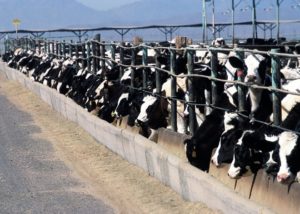 Figure 1 Cows on a feedlot. 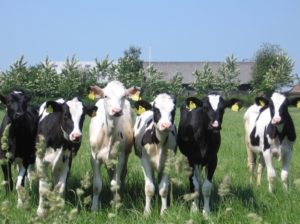 Figure 2 Cows on a small dairy. 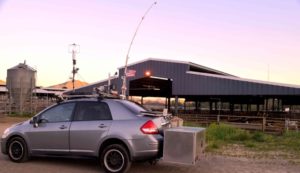 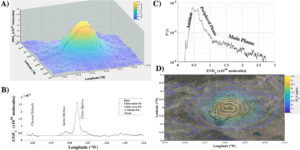 Ammonia is a colorless gas compound of nitrogen and hydrogen, and is commonly used in the making of fertilizers and household cleaning products. Anyone who has been at a dairy in the summer knows from their nose that many gases other than ammonia are released.