The organisms that undergo chemosynthesis are called chemoautotrophs and are a part of the larger group of species called autotrophs – using non-biogenic substances to support themselves, while converting them into nutritional organic material that can support higher life forms. These chemoautotrophs use seep hydrocarbons then are consumed by predators in the complex marine food web. These hydrocarbons are methane gas, and larger molecules, up to and including oils. This allows the energy they make to travel up trophic levels. 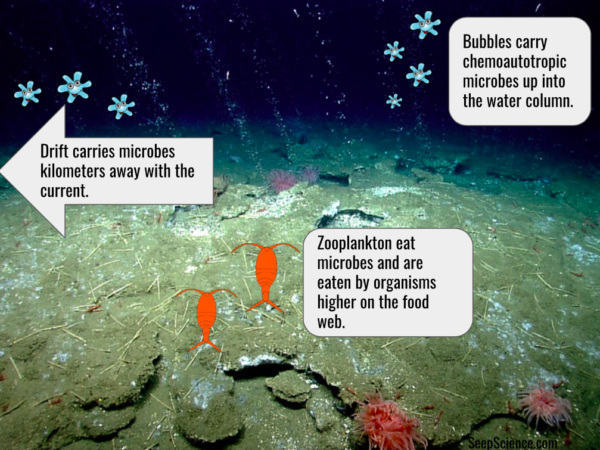 Marine ecosystems differ greatly from land ecosystems in the sense that almost all marine organisms are predators. Primary producers (akin to plants on land) are algae and plankton. These are then consumed by nearly microscopic zooplankton, and also filter feeders. The rest of the sea creatures are predators. The graphic below demonstrates a highly simplified food chain. 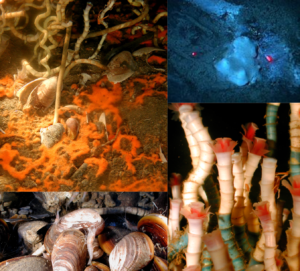 Photo-collage of some of the many organisms present in cold seep ecosystems: microbial mats, tubeworms, krill, and mussels.

Most seep ecosystem literature is focused on deep sea seep ecosystems. These thriving ecosystems are high biomass with high biodiversity despite never seeing a ray of sunlight, particularly compared to the barren deep sea seabed. Hydrocarbons from marine seeps are the primary energy source for many species in the deep sea living near seeps. Unlike in the deep sea, in water exposed to sunlight (photic zone), chemosynthetic organisms generally are out-competed by non-chemosynthetic organisms that use energy derived from the sun (directly or indirectly).

Nutrients in marine ecosystems often are trapped in low trophic levels – such as autotrophs or primary producers. For example, a phytoplankton bloom is an event where primary producers (the phytoplankton) accumulate rapidly, discoloring the ocean and depleting oxygen and other resources. This creates a nutrient deficient patch in the sea where chemosynthetic energy may be a saving grace. 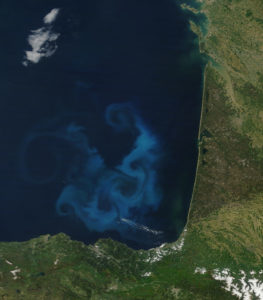 Phytoplankton bloom in the Bay of Biscay (from a NASA satellite.)

The public doesn’t often consider hydrocarbon seeps as an influential food source for marine life, but taking a look at sperm whales’ dietary needs may make us reconsider. Sperm whales are deep-sea foragers that require a very high net primary productivity. Moreover, to hunt, they dive to great depths, expending a lot of energy to search for food in the generally desert-like deep sea.