Searles Valley, CA, July 6, 2019 – A magnitude 7.1 earthquake near Searles Valley, California was felt by cities in central and southern California during the July fourth weekend. The quake and its thousands of aftershocks also affected the strategically important Naval Air Weapons Station China Lake, which remains shut down due to geothermal hazards and ongoing aftershocks. Specifically, Searles, Panamint, and the famously barren Death Valley – home to the Ubehebe volcanic crater – were shaken by the earthquakes.

Within 24 hours of the earthquake, a team from Bubbleology Research International (BRI) arrived in the Death Valley area to make observations. BRI has developed a mobile air quality laboratory – AMOG Surveyor – that measures a wide range of trace gases. The team was curious as to the presence of pollutants that could’ve been released from subsurface sources (magma reservoirs) by an earthquake. However, no literature has been published on such gases being present in the Death Valley area. In the spirit of discovery, BRI went to “See what we could see,” said Dr. Leifer, BRI CEO and head scientist. 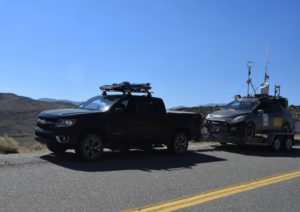 BRI found elevated carbon dioxide and sulfur dioxide levels with AMOG Surveyor throughout Panamint Valley and even in Death Valley, further from the quake. The AMOG (AutoMObile trace Gas) surveyor is an air quality lab built into a sedan, which continuously gathered air samples and meteorology in these valleys. Although AMOG can take accurate measurements at up to 55 mph, the rough terrain in the valleys required towing by a less delicate vehicle. Carbon dioxide (CO2) and sulfur dioxide (SO2) appeared to be leaking along fault lines where seismic activity continued as aftershocks and some areas of the fault line had more gas emissions than others. Data are displayed in real time and were used to collect targeted air samples for lab analysis by Professor Donald Blake’s lab at UCI.

CO2 levels were higher than their usual levels in the area despite no traffic or surrounding cities/industry. BRI also found elevated SO2 in comparison to typical California levels, however, there are no published baseline levels for much of the Mojave Desert including Death Valley. CO2 and SO2 gas hotspots appear to match for Panamint Valley and in particular, Manly Pass. Dr. Leifer suspected Manly Pass Fault might be a hotspot because the Panamint Valley Fault intersects the Manly pass fault here, shattering the creating pathways for gas to escape from. These pathways naturally seal up with dust/dirt, but an earthquake can open them again. This is how seismic activity can cause trace gas emissions. 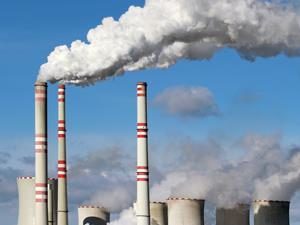 Sulfur dioxide or SO2 is an invisible, strong-smelling, and relatively reactive gas. It is most commonly released from volcanic activity, burning of sulfur-containing fossil fuels, and dairy farms. Sulfur dioxide levels are low in California relative to other states because sulfur compounds were removed from gasoline in 2003 to reduce air pollution.

The BRI team was happy to have their suspicions confirmed as these gases are consistent with geothermal gases. The team decided to focus observations on the Death and Panamint Valleys, where measurements four years prior found only background CO2 and CH4 and where there’s no industry or highly populous area. This allowed them to confirm that the high levels of CO2 in Manly Pass were likely a result of the earthquakes. 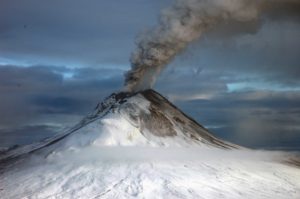 The primary geothermal gas is water vapor. Other important gases are CO2 and SO2 (and H2S). These are released from underground containers of magma as fault lines shift and release air pressure. Both of these gases, as well as others released are pollutants and can pose a hazard to human health.

Geothermal activity can present as hot springs, emissions, and volcanic activity. While hot springs may be a profitable tourist attraction, toxic gas leaks and volcanic eruptions are less desirable to visitors and residents. BRI is interested in identifying these potential hazards and their risk to surrounding communities.

In light of their discovery, the BRI team proceeded to take measurements around the Ubehebe crater, a volcano considered to be inactive since 1200 A.D. The same gases (CO2 and SO2) were being released as far north as the crater, far from the sites of the quakes. Dr. Leifer proposes that the pattern of emissions found could suggest an active magma reservoir as wide as a couple hundred square miles under the Searles Valley area.

Ubehebe Crater in Death Valley National Park, CA. An ancient volcano that had an explosion of steam hundreds of years ago when magma came into contact with groundwater (Owen Rojek 2015).

The emissions found in these valleys are likely to come from a geofluid system where magma reservoirs and pressurized gases lie under the upper mantle of the earth.  Movement of fault lines can cause migration pathways to be created or reopened, releasing gases present under the surface of the Earth. The emissions found at Ubehebe Crater suggest that magma may be closer to Earth’s crust in these areas.

The areas of most interest to the continuation of this research are Panamint Valley, Manly Pass, and the Ubehebe crater. When Dr. Leifer took measurements in the Death Valley region four years ago, these levels of emissions were not detected, suggesting a change in potentially hazardous geothermal activity.

The emissions from the Panamint Valley Fault are hypothesized to stay elevated throughout the period of aftershocks. Changes in geofluid and volcanic patterns due to seismic activity can be measured by observing pertinent trace gas emissions. BRI will continue to perform repeat visits to the site in order to observe the pattern of emissions from the changing fault lines post-earthquake and further test the potential relationship between seismic activity (earthquakes) and emissions near an active fault line.