In 2014, BRI developed a unique facility, AMOG Surveyor™ (now rebuilt as SIS™), which was developed for satellite validation of greenhouse gas observations and other trace gases by acquiring high quality, fast, meteorology, aerosol, and trace gas concentrations at up to highway speed. AMOG Surveyor was built into a commuter vehicle (Nissan Versa), requiring significant performance and power enhancements. Over the years, AMOG Surveyor evolved into its current iteration but the lack of off road capacity, and a breakthrough in how to measure winds from a pickup truck, led to a reincarnation as SIS for deployment in TMOG Surveyor. AMOG Surveyor has been used to investigate a wide range of science questions, reported in a number of peer-reviewed publications* on husbandry emissions (2020 paper, 2018 paper, 2017 paper, 2016 paper), oil and gas emissions (2019 paper, 2018 paper), chemical release disasters (gas pipeline leaks), air pollution (in the Mojave Desert), release of trace gases due to an earthquake, and others.

The critical AMOG Surveyor flaw was its inability to collect data on dirt roads that require 4WD as well as space and power constraints. Thus, in 2020 BRI embarked on the development of SIS (Standard Instrumentation Suite) designed for deployment in the bed of a 4-WD pickup (Chevy Colorado) – TMOG Surveyor. The design emphasized flexibility to allow deployment on a range of platforms, including marine vessels for offshore surveys, truck deployment for surveys on paved and unpaved roads, and trailers for long term monitoring. SIS analyzers can be swapped to meet mission-specific needs. In addition, SIS supports targeted sampling (up to 48 sample cans) with targeting selected based on real-time data visualization for subsequent laboratory analysis by the Blake Lab at UC Irvine. The Blake lab analyzes for 70 or more different trace gases with detection concentration limits of a few parts per trillion.

SIS trace gas analyzers measure 14 gases: methane (CH4 and a carbon-13 isotope of methane 13CH4), ethane (C2H6), carbon dioxide (CO2), carbon monoxide (CO), water vapor (H2O), ammonia (NH3), ozone (O3), sulfur dioxide (SO2), nitrous oxides (NOX, NO, NO2), nitrogen dioxide (N2O) and hydrogen sulfide (H2S). SIS measures by Cavity Enhanced Absorption Spectroscopy (CEAS), fluorescence, and absorbance analyzers. This wide range of trace gases that SIS measures provides a comprehensive view of air quality. These gases are of importance to many environmental, industrial, and atmospheric chemistry processes, including quantification of emissions (see table below). Many of these gases interact with one another as well as other (unmeasured) trace gases leading to reaction products, some of which have greater health implications than the original trace gases. 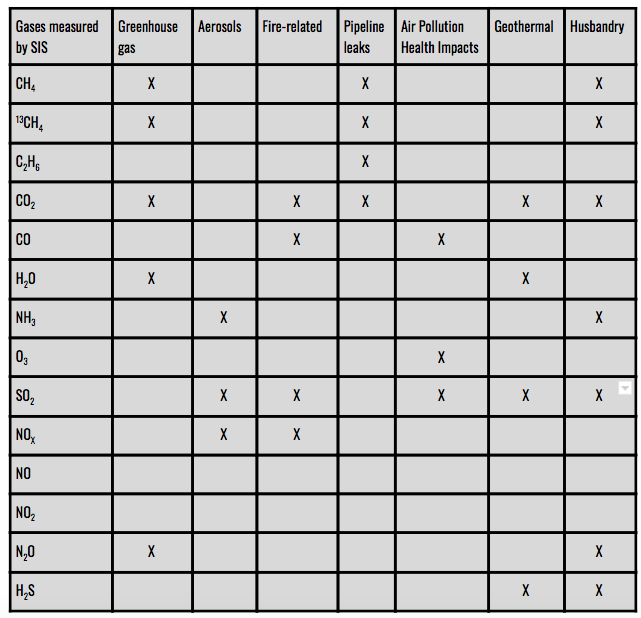 Table of gases measured by SIS and which important processes/events they’re involved in. An “X” indicates the involvement of that gas.

Analyzers that are subject to vibration noise (ThermoFisher Scientific analyzers) are mounted in an air suspension framework. This greatly reduces noise at faster rates.

Each analyzer pulls sample air through heated sample lines from the front of TMOG at a height of 3.5 m above ground through a Teflon-lined, rain-shielded inlet, except for the NH3 analyzer. Heating is only used when there is a risk of rain or fog to prevent condensation in the sample lines. NH3 arrives from a separate much shorter, ½” diameter PFA Teflon line. Sample lines are heated (except NH3) and insulated to prevent condensation of the air being collected. On SIS-Boat, the sample inlets are mounted on the same tower as the anemometer at ~5-m above the sea surface. Targeted sampling air is pulled from the same inlet as the analyzers and then pumped to the canister pack. Air flows continuously through the canister pack, flushing the lines. A canister sample is collected by closing the flow line and slowly opening one evacuated canister, pressuring it to 1 b

SIS is customized to improve the measurement of each analyzer. For example, ammonia can be tricky to measure since it’s a sticky gas, so its sample line is shorter than the rest to allow for an accurate concentration reading, its tube isn’t heated to avoid conversion of ammonium nitrate aerosol. Several analyzers also have bypass flows to shorten the transit time and mixing in the sample lines. SIS also uses a high flow vacuum pump to draw air into the CH4 FGGA and NH3 analyzer at a fast rate. The methane isotope analyzer (CH4, 13CH4, C2H6, and  CO2) also has its own external pump, and is connected to the main vacuum pump bypass line. Pumps are mounted in a vacuum compartment that is insulated from the rest of the SIS cube.

SIS meteorology measurements include high accuracy pressure, temperature, and humidity as well as 3D winds. To measure wind, a 3D sonic anemometer is mounted on a vertical pole attached to the front of a horizontal truss that extends forward on TMOG’s roof rack. A decision was made not to mount the anemometer off the TMOG bumper due to safety concerns – in an car accident, a bumper anemometer pole could become a javelin towards the cab. The anemometer is mounted on a 10-m tower on SIS-BOAT. Dual GPS’s keep track of SIS’s location and allow conversion of measured winds into real winds by subtracting SIS velocity and provided redundancy.

Mobile geiger counter mapping by SISTER can study sources including from near surface rocks, including from radon, and from other geological sources. A recent study from fixed stations showed that hydrocarbon production which lifts geo-fluids to the surface led to higher radiation levels downwind. In addition, it is possible that natural seepage along fracture may transport radon to the surface faster, leading to higher radiation levels.

SIS also focuses on the generation and evolution of aerosols and their size distribution. Aerosols have significant health concerns particularly smaller than 1.0 micrometer as they penetrate deep into the lungs and are not readily cleared by the lungs natural defense mechanisms. These defenses are effective at trapping aerosols larger than 5.0 micrometer in the lining-fluid of the lungs airways. 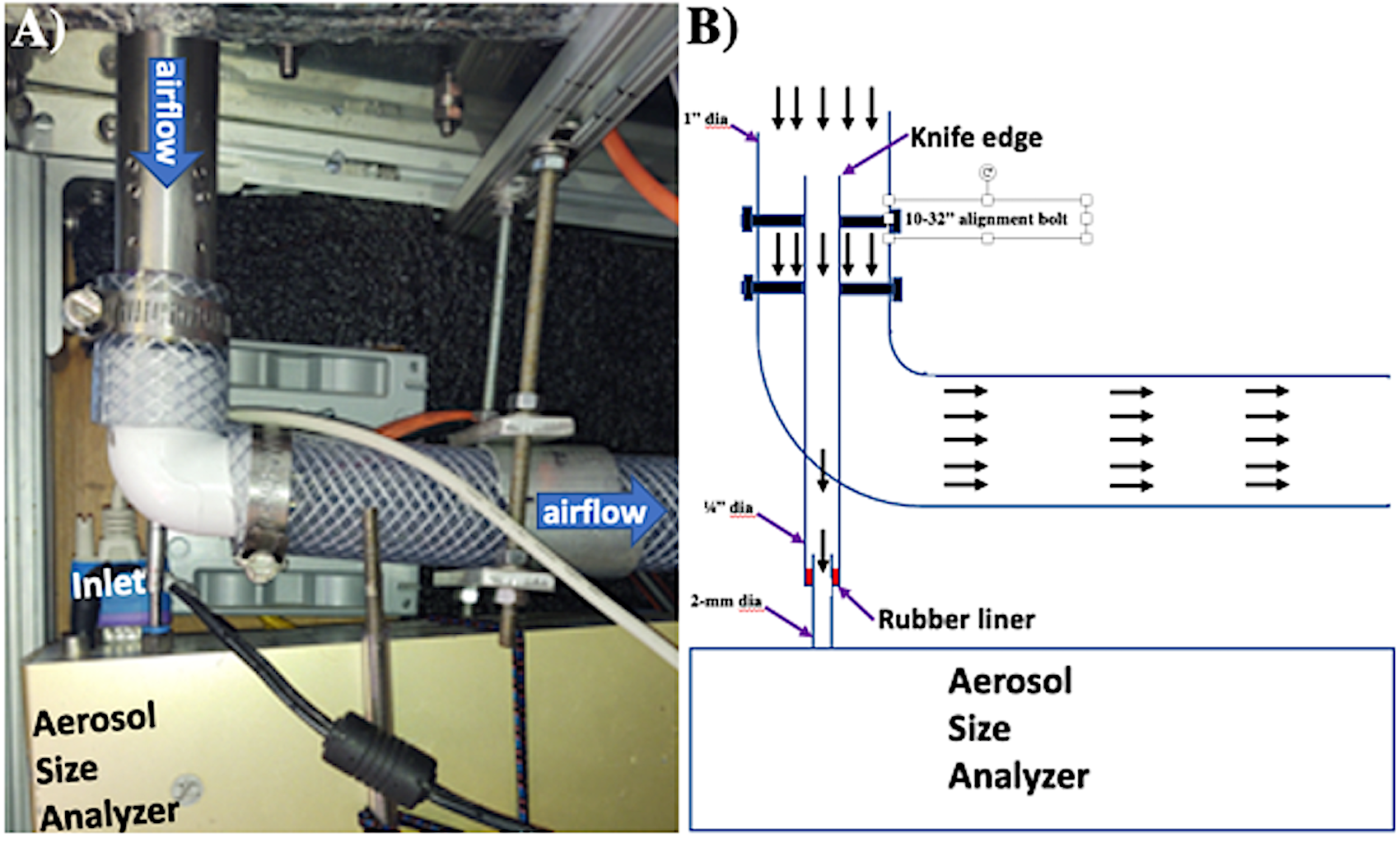 Diagram of how the aerosol size analyzer collects sample air. The inlet tube’s front edge is knife edged to avoid altering the aerosol transport and potential bias against smaller particles. The inlet cap is PM-10 rated to preserve large aerosols while blocking rain and insects.

Ultrafine aerosols are formed by bi-directional reactions between NH3 with NO2 and SO2 to form ammonium aerosol particles. Large volatile organic hydrocarbons can deposit onto these aerosols and also penetrate deep into the lungs. SIS also measures aerosol size spectra, allowing the characterization of the downwind development of aerosol sizes. In addition, vertical aerosol profiles up to 8,000 m are collected by a ceilometer, which uses back-scattered laser light to derive the aerosol optical depth profile. Combining the size and profile measurements allows derivation of the total aerosol load in a plume or the mixed layer. The aerosol size analyzer includes a filter, which can be swapped and stored for later chemical and mass analysis to derive aerosol density and toxicity.

SIS produces medical grade power from an inverter generator and a dual conversion UPS as well as linear power supplies for analyzers and sensors. Non-science infrastructure, such as vacuum pumps and air conditioners are powered directly from the generator, albeit with timer relays for high consumption items to simultaneously turn on. The generator is mounted on the tailgate (when on TMOG) with its exhaust directed into a duct that also directs the truck’s exhaust to the back edge of the tailgate.To maintain SIS analyzers at a stable temperatures – a major source of noise and bias – SIS also includes a 13,500 btu roof air conditioning and a number of fans to move cool air around the cube. Supplementary fans have been added to ThermoFischer analyzers to increase airflow into the analyzers interiors.

A portable computer continuously integrates SIS analyzer data streams for archiving in an asynchronous ASCII tag stream and for real-time visualization in Google Earth using custom code written in MATLAB. Although far larger, ASCII tag streams (based on GPS), provide significant ability to recover if the data file is corrupted.