Idling freighters waiting offshore the Ports. Photo by Ira Leifer on a data collection survey from the Navy Pier.

The nation’s busiest ports are the Ports of Long Beach and Los Angeles (hereafter the “Ports”). These Ports handle an incredible 9-million twenty-foot shipping containers annually, as well as hosting major refineries and other large industries. The Ports’ importance is highlighted by the estimated 193,00 jobs they support – just in the Los Angeles and Long Beach areas (2.9 million across the US).

These myriad sources create pollution that drifts into downwind communities. The vast majority of shipping containers are transported by Heavy-Duty Diesel Trucks that fill the freeways (notably the I-710) that connect the Ports with the national interstate highway system, with trains carrying the remainder. Idling freighters waiting to enter the Ports also emit pollutants including PM2.5, and NOX (nitrogen oxides). In normal times, trucks form an unending convoy stretching for miles on the I-710 artery, a linear source of pollution that drifts into the downwind, dense, neighborhoods of north and south Long Beach. The major health concern is the diesel particulate matter that these trucks emit – often referenced as PM2.5 – the number of aerosols smaller than 2.5 µm. PM2.5 has been estimated to account for 70% of the cancer risk (by air pollutants) in Southern California. As such, health problems manifest among the people who live close to freeways, including those of the Ports. 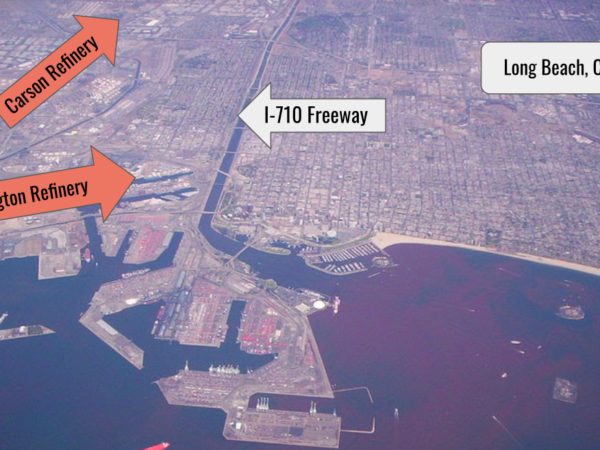 Aerial view of the Port of Long Beach.

The COVID-19 crisis provides a unique opportunity for improving our understanding of the relationship between air quality and health as the stay-at-home orders dramatically slowed business, traffic, and thus, activity at the Ports. Normally, the Ports are a beehive of activity day and night with never a break. Pilot surveys showed a drastic decrease in pollution at the Ports. The findings were amazing; for example, NOX was 300 ppb last summer, but was 30 ppb this May, at the height of the COVID-19 shutdown. The proposed study will map out the health improvements in the Port’s downwind communities from the cleaner air during the many months of the COVID-19 slowdown. The proposed study hypothesizes that these effects are stronger for communities downwind of the I-710 than those downwind of both the I-710 and the refineries. 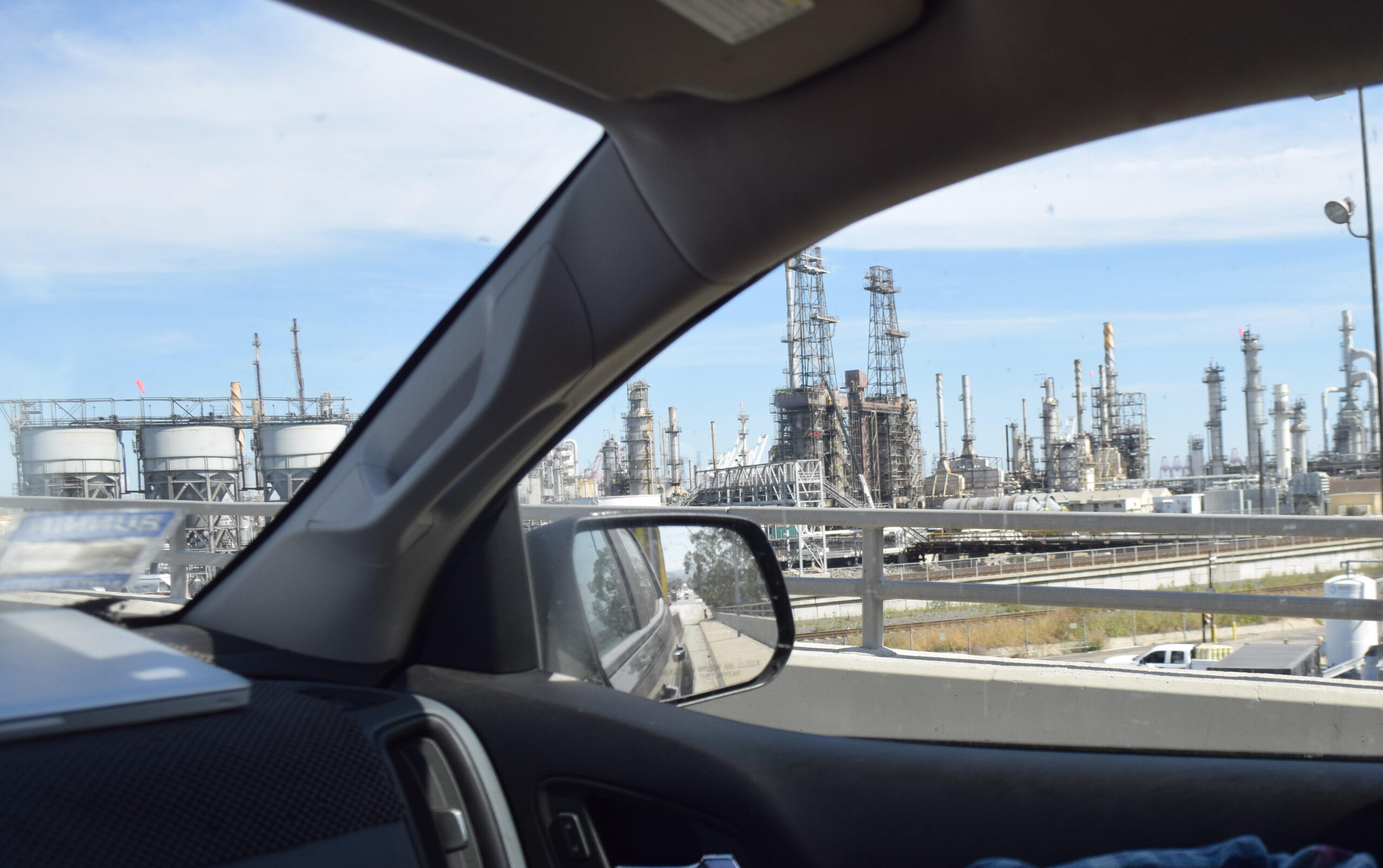 Phillips 66 refinery through TMOG’s window, east of the Port of Los Angeles.

There are a number of major refineries that produce fuels (blends) for California and other uses in the Port area. These refineries process crude oil that mostly arrives by pipeline from oil and gas fields in Los Angeles, around California, and out of state, though some of the oil and gas is even produced at the Ports. In the process of transforming crude oil into many petroleum products the refineries also release atmospheric pollution that drifts with winds – typically slightly onshore and from the southwest during the day and evening, though preliminary studies have identified important complexity in the air flow patterns. Nocturnal flows are offshore. 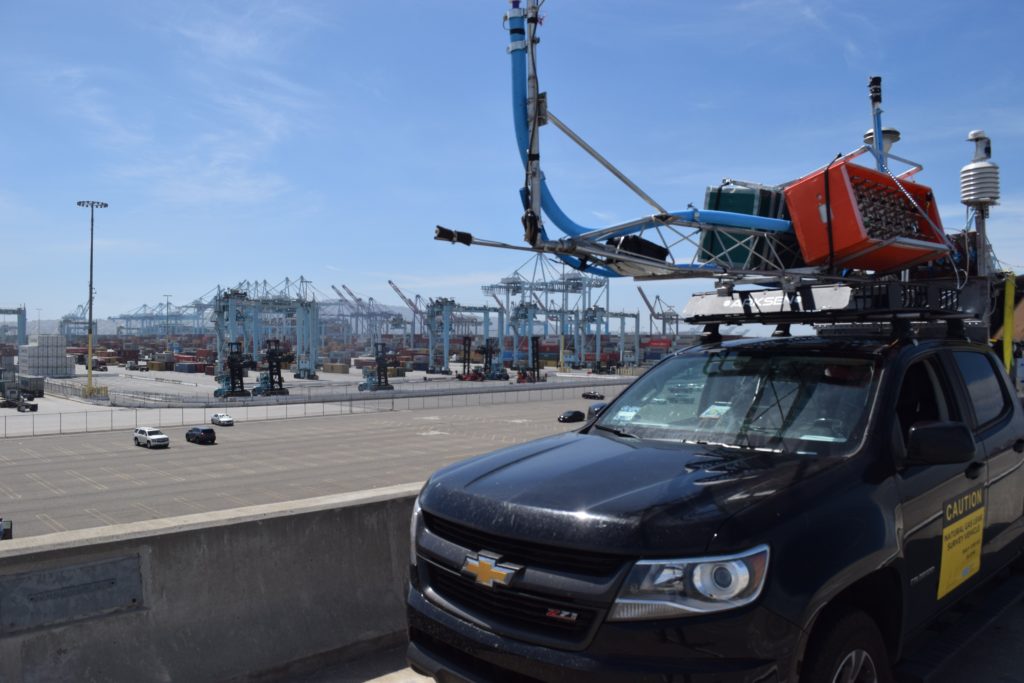 SISTER on TMOG at the Ports on a data collection survey.

BRI has conducted monthly trace gas mobile surveys of the Ports, nearby industrial areas, and downwind neighborhoods. Surveys will continue through the recovery period of Port activity (and air quality degradation). In situ data will be collected by SISTER™ (Standard Instrumentation Suite: TMOG Enabled for Response, TMOG Surveyor™ – Truck MObile trace Gas surveyor). SISTER is a unique BRI asset that can measure 14 trace-gases, meteorology, aerosol profiles, and aerosol size-spectra while driving at up to highway speeds. SIS can be installed in TMOG, or on a boat, or a trailer, etc. Air quality surveys measure winds, methane (at high time-resolution), and other trace gases with health implications, such as hydrogen sulfide (H2S), for Port area sources to derive emissions. Then, emissions are modeled to derive downwind community exposure. BRI also collects sample canisters near sources and in downwind communities to create a fingerprint library to identify the source(s) of gases in the downwind communities. BRI surveys have enabled the team to identify key roads, major sources, and typical wind flow patterns.

BRI’s data can be used to inform health impact studies both by identifying downwind communities and reference communities, by profiling the pollution composition(s), and by fingerprinting the sources of pollution that is measured in downwind neighborhoods. This pollution profile identifies likely health impacts, which then can guide epidemiological studies and further detailed health studies.

The Ports are the largest pollution source in the Los Angeles Basin with traffic and related industrial activity for the Ports releasing a multitude of air pollutants (see graphic above), which have many health implications, supported by a wide body of literature. Please find below a summary of a few selected published health studies. BRI surveys have shown high particulate matter levels downwind of the Ports under normal operations as well as other trace gas pollutants.

Particulate matter adversely impacts cardiopulmonary health (Pope III & Dockery, 2006), (Franklin, Booke, & Pope III, 2015). A 2007 study showed that proximity to highways is directly associated with adverse pulmonary health outcomes due to exposure to particulate matter, NOX, CO, and others (Brugge, Durant, & Rioux, 2007). Both PM and NOX also can restrict lung volume (see de Jung and colleagues (2016)) and lead to wheeze, cough, and shortness of breath. Ambient PM exposure has been shown to incur significant adverse health effects (Shaughnessy, Venigalla, & Trump, 2015). SO2 and PM10 are both associated with cardiovascular and respiratory mortality, however, exposure to PM10 accounts for a higher proportion of mortalities (Khaniabadi et. al, 2017). 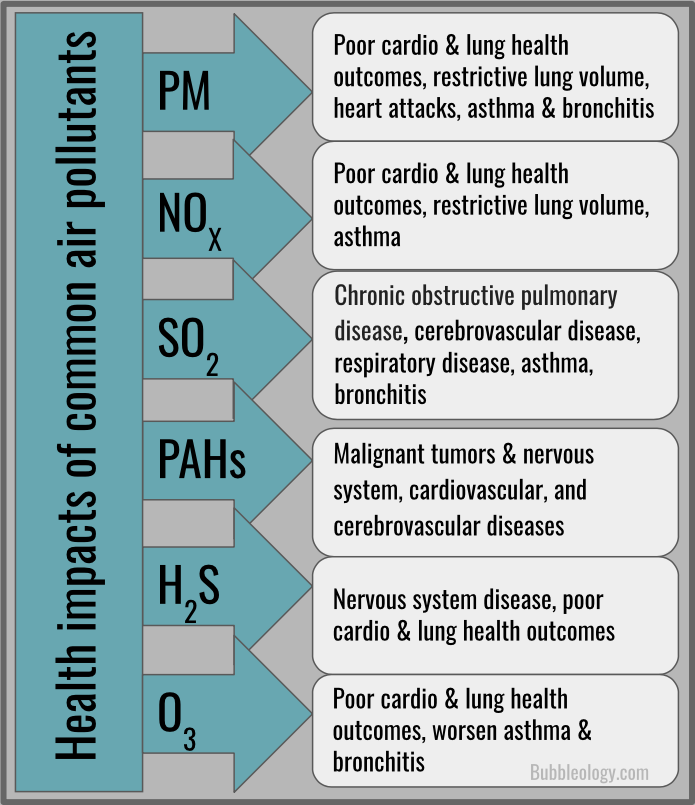 Sulfur dioxide (SO2) is released by refineries and traffic in general, although not typically by California traffic as sulfur is not allowed in California (on-road) fuels. Wu et. al (2020) found that increased SO2 pollution in Beijing correlated with a rise in mortality and morbidity. Exposure to SO2 is deleterious to cardiopulmonary health, contributing to conditions such as chronic obstructive pulmonary disease (COPD), cerebrovascular disease, and respiratory disease, along with asthma and bronchitis (Wu et. al, 2020). Hydrogen sulfide (H2S) is an industrial byproduct that also is emitted from dairies and sewage systems. H2Saffects cardio-pulmonary (lung) health and causes neurological deficiencies (Kilburn & Warshaw, 1995).

Emissions from refineries in the Port area also release emissions rich in hydrocarbons like polyaromatic hydrocarbons (PAHs). PAHs have been implicated in increased mortality from malignant tumors as well as nervous system, cardiovascular, and cerebrovascular diseases (Li et. al 2016). Traffic, refineries, and other industrial activities release volatile organic compounds (VOCs), which negatively impact lung function and can increase risk of asthma and even leukemia, especially in children (Cakmak et. al 2014). 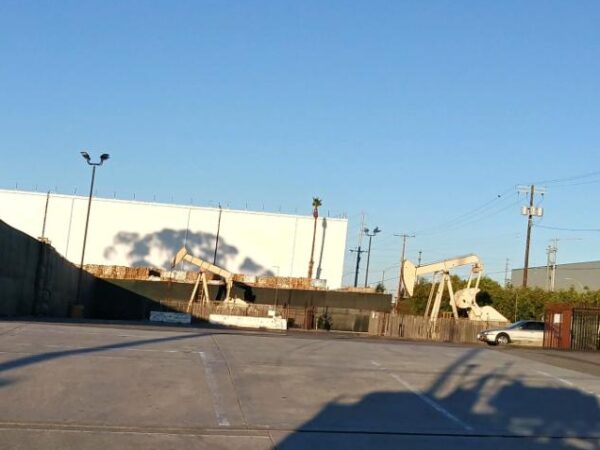 Oil wells near the Ports captured by BRI’s CEO Ira Leifer on a data collection trip.

Ozone (O3) is another common pollutant formed as a result of emissions from refineries, other industries, and traffic. Hůnová et. al (2012) found an increased rate of hospitalization and mortality for respiratory and cardiovascular diseases during a time period of high ambient ozone levels. Long term exposure (such as that of residents of polluted communities) to O3 in combination with PM worsens an individual’s health post-heart attack. Specifically, PM was associated with an increased risk of mortality (Malik et. al, 2019).

Children are particularly at risk. In general, poor air quality (like that of the Ports) can severely impact children. For example, Berhane and colleagues (2016) found a relationship between worsening air quality and the occurrence of bronchitis symptoms. Another study by Gauderman et. al (2015) observed an improvement in lung-function development as levels of PM and NOX decreased. Asthma risk also increases for communities that are near pollution sources, such as highways and major traffic thoroughfares (McConnell et. al, 2006).

The unprecedented COVID-19 pandemic has presented a time-critical opportunity to understand the relationship between trace gas pollution exposure. Thus, BRI proposes a time-critical study to understand this relationship and to inform future health studies arising from the massive (positive) air quality changes at the Ports of Long Beach and Los Angeles. BRI is continuing its efforts to monitor air quality in the Port area, in support of future health studies. 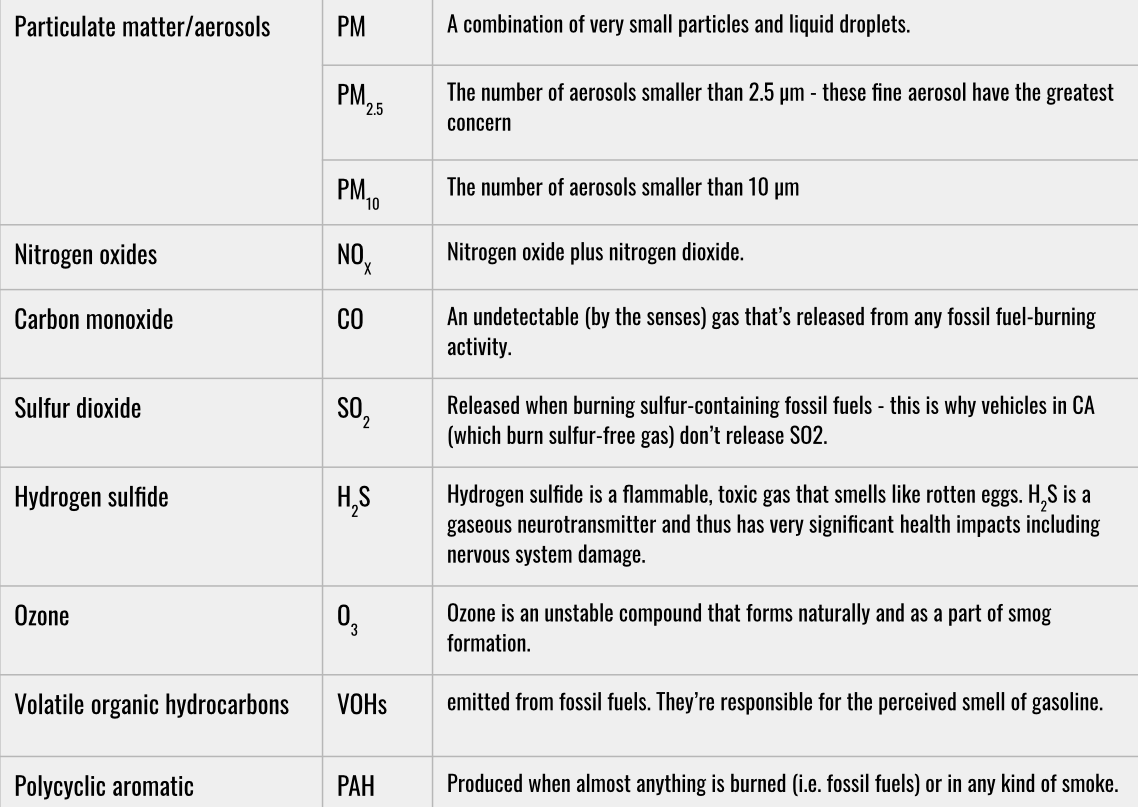 Khaniabadi et. al 2017 – “Human health risk assessment due to ambient PM10 and SO2 by an air quality modeling technique”

Malik et. al, 2019 – “Association of Long-Term Exposure to Particulate Matter and Ozone With Health Status and Mortality in Patients After Myocardial Infarction”